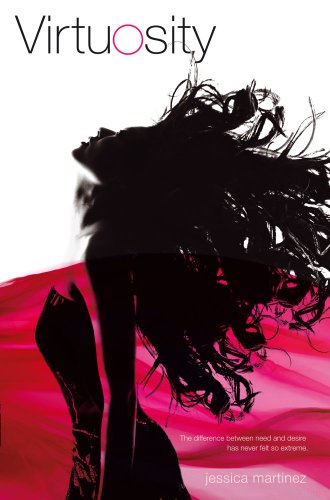 17-year-old Carmen Bianchi is a world-class violinist, with several CDs, Grammys, and international tours under her belt. But the biggest challenge is yet to come, in the form of the Guarneri Competition, the world’s most prestigious young violinists’ competition. Carmen wishes she could be confident of a win, but her biggest competition is Jeremy King: British, handsome, arrogant, astoundingly talented…and more attractive than she ever thought possible.

Carmen’s attraction to Jeremy is just one of her many pre-Guarneri problems. Her mother, Diana, is becoming insufferably interfering, and Carmen is also taking pills to alleviate her massive pre-performance anxiety. With so much pressure stacked up against her, can Carmen pull through, or will she end up crashing and burning?

I delight—and simultaneously despair—when a book is more than what its synopsis implies. I delight because is better than I expected. I despair because I wouldn’t have picked it up on account of its synopsis had someone not convinced me to read it, and I despair that others might miss out on it for the same reason I almost did.

VIRTUOSITY’s synopsis suggests that Carmen’s main conflict will be against her performance anxiety and Jeremy, but the fact is that there is so much more going on in this book. In fact, my favorite part of this read was not even mentioned in the synopsis: Carmen’s struggle with her overbearing mother. Parents are often cast in the adversarial role in adolescent fiction and reality, but the fact of the matter is that it is extremely difficult to write a believably antagonistic parent. That’s where Jessica Martinez succeeds. Carmen’s mother, Diana, is a failed musician, and channels all of her hopes and demands onto Carmen. Their relationship is wonderfully fraught with good intentions and poor actions. I found myself wanting to reach into the book and strangle Diana a little—and that’s how I know when a character is well-written.

The romance between Carmen and Jeremy is still a bit of a stretch and a YA cliché, but Martinez lets Carmen’s history of crippling performance anxiety unfold in such a way as to wring your heart. VIRTUOSITY is, simply put, a warm contemporary read that should satisfy even the most jaded of readers.

Cover discussion: I'm not a big fan. The retro coloring is, I think, overdramatic. In fact, until the publisher pitched it to me, I had no interest in reading this book because of its cover. Which would've been a shame.

Received for review from publisher.
Posted by Steph Su at 9:40 AM