SHADOW OF NIGHT Giveaways and News!

On July 10th, Viking Adult, an imprint of Penguin, will be publishing SHADOW OF NIGHT by Deborah Harkness, the sequel to the bestselling A Discovery of Witches of last year.


SHADOW OF NIGHT picks up right where A Discovery of Witches left off. Diana Bishop and Matthew Clairmont, a witch historian and vampire geneticist respectively, have timewalked to Elizabethan England on their hunt for a magical alchemical manuscript, Ashmole 782—its sudden appearance and sudden disappearance have upended the delicately ordered world of magical creatures (witches, vampires, and daemons), threatening to unleash unprecedented metaphysical chaos.

Though Diana and Matthew have escaped the threats of the present, they soon find the past holds its own challenges—Diana must find a witch to continue her magical education, a task made difficult by a rash of witch hunts across the British Isles. And Matthew finds himself back in a life he thought he left behind, reuniting with friends and family that had long been reduced to memory, opening wounds he thought had healed. Some of those friends comprise the infamous School of Night, a coterie of visionaries that includes Christopher Marlowe and Sir Walter Raleigh. Together, Matthew and Diana must navigate the new dangers of an old century—bringing them closer and closer to solving the mystery of Ashmole 782.


Deborah Harkness is a professor of history at the University of Southern California. Her publications include works on the history of science, magic, and alchemy. Her most recent scholarly book is The Jewel House: Elizabethan London and the Scientific Revolution. She has received fellowships from the Fulbright Association, the Guggenheim Foundation, the National Humanities Center, and the American Council of Learned Societies, among others. She is also a noted wine critic and blogger. A Discovery of Witches was her fiction debut. Learn more at Deborah's author website.

A combination of history and magic? Sounds awesome, right? I hope to get around to reading A Discovery of Witches--and then Shadow of Night--sometime this year!

For those who haven’t gotten around to reading A Discovery of Witches: Amazon is offering the e-book as their “Deal of the Day” on June 10th, where readers will be able to buy it for just $2.99 on that day only. Put it on your calendar!

For even more goodness, on Deborah’s Facebook page, Viking is hosting a contest leading up to the book’s publication. Every Friday from June 1st to July 6th, four winners will be selected to receive an advance copy of SHADOW OF NIGHT signed by Deborah and sample bottles of two perfumes specially selected to represent the scents of Matthew and Diana. To enter, click on this link to the contest page!


As if that wasn't enough, I get to give away a set of specially designed Ashmole 782 temporary tattoos, 6 All Souls Trilogy-related buttons, and a finished copy of SHADOW OF NIGHT! Check out the goods below: 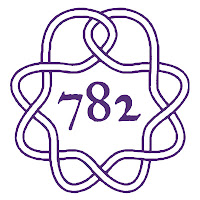 a Rafflecopter giveaway
Posted by Steph Su at 9:00 AM