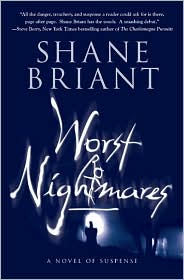 Tags: horror, thriller, murder, serial killer
Rating: 3.5 out of 5
Summary
Dermot Nolan is living a writer’s nightmare. The Booker Prize-winning author has not had an idea for a new novel in over a year, and his financial backers and even his loved ones are beginning to get on his case about it. Then what could possibly be his godsend arrives: a crudely handwritten manuscript stuffed in his mailbox. The author, an Arthur K. Arnold, claims that it is his diary, and that all of the murders, done by a man known as the “Dream Healer,” described in the manuscript have actually occurred.
At first, Dermot dismisses the graphic writing as a sick man’s fiction. But even when research causes him to doubt his original conviction—could these murders actually have taken place?—Dermot still goes ahead and publishes the manuscript under his name. The novel is a hit, and Dermot becomes a wealthy celebrity—but when new evidence hints that these murders had indeed taken place, suspicion closes upon Dermot as a possible serial killer. Can he find out who is behind this framing before his own worst nightmares are lived out?
Review
I don’t read much horror-thriller, but I did enjoy WORST NIGHTMARES—if “enjoy” is the word to describe a novel that’s so vivid, so gruesome, and so well thought-out that I found myself shuddering while reading. The chapters often alternate between Dermot’s third-person point of view and the point of view of the Dream Healer, so that you’re never settled: you’re either in the mind of a merciless, albeit creative, serial killer, or else you’re witness to Dermot’s mental breakdown and self-doubts.
There are not that many characters in WORST NIGHTMARES, but those who are present are quite well-drawn for a thriller novel. Of course, its genre practically demands that more attention be paid to the plot than to the characters, but even so, Dermot and his wife Neela’s reactions to an unusual and volatile situation are believable and justified. All of the decisions they make—both bad and good—are the result of a very real, very human thought process.
The one major thing I found lacking in this novel was its predictability. Maybe it was just me, but I had my hunch as to who the mastermind behind the killings was about a third of the way through, and, in some of the slower moments, the desire to verify the accuracy of my hunch (I was right) was what kept me going. I’m not a fan of predictability, but if that doesn’t bother you much, and if you allow your mind to shut off just enough to overlook a few other minor flaws—questionable relationship dynamics, occasionally slow pacing, and loose ends—then the issues I had with this book won’t bother you all that much.
All in all, WORST NIGHTMARES is a good read in a genre that’s become increasingly tough to stand out in. It’s not a book I’d have picked up on my own, but fans of horror and thriller novels need to read this Shane Briant standout in order to truly understand it.
Similar Authors
Stephen King
Thomas Harris (The Silence of the Lambs)
Dan Brown (The Da Vinci Code)

Writing: 4/5
Characters: 3/5
Plot: 4/5
Overall Rating: 3.5 out of 5
Thank you, Imran and Vanguard Press, for sending me this book for review!
-
Interested? Sound like your type of book? Want something to make your toes curl in the middle of the night? The fantastic Imran from Meryl Moss Media Relations has kindly provided me with two copies of WORST NIGHTMARES--and they can be yours!
To enter, leave a comment below with the name of your favorite horror or thriller read (if you don't like those genres, explain why).
Extra entries:
+1 for following me (and letting me know below)
+1 for linking to me somewhere
Sorry, US and Canada only (these are BIG books!). This contest will end on Tuesday, June 30.
Posted by Steph Su at 7:45 PM