Review: Secrets of a Christmas Box by Steven Hornby 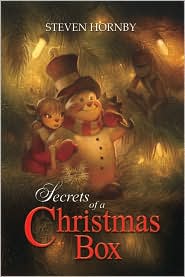 Deep in the recesses of one family’s Christmas tree, many ornaments are waking up from their year-long nap. When Larry the Snowman discovers that his brother is missing from the tree, he sets off with his friends—his girlfriend, Debbie the Reindeer Woman, the devoted Tinsel, and newcomer Splint—on a never-before-done adventure: they are going to leave the tree to find out what happened to Larry’s brother. What they discover is much more sinister than they could ever imagine, and it’s up to the brave ornaments to save the day for them all…or die trying.

SECRETS OF A CHRISTMAS BOX is another of those books that is difficult to market. At around 200 pages full of mostly text, it’s too advanced for a toddler or early elementary school kid which is probably the ideal audience for this story. The occasional small illustration will not satisfy the young audience’s desire for literary participation. And the infantilizing tone of the book will turn away older readers.

Perhaps the best thing one can do with this book is to have it as a holiday read-aloud, or a bedtime story for really young children. The author is a pretty successful writer for the silver screen, but his tendencies to “write young” show in the clichéd dialogue: the human parents of the house in which the tree is located, for example, only address one another as “love” and talk of mundane subjects that come straight out of a fifties TV sitcom like Leave It to Beaver. Indeed, Hornby’s original idea had been to write this story as a screenplay for an animated film, and I believe it would’ve worked a lot better that way. Little kids would be much more entertained if the cheesy story and writing were accompanied by cool animated effects.

It was a cute idea, but it’s extremely difficult to get past the writing to grasp the themes of this book. Parents and guardians of young children can consider this as a cute little story to read by the fireplace (you can really ham up the voices with this dialogue), but those who don’t have small children may want to pass on this one.

Received for review from Ecky Thump Books, Inc.
Posted by Steph Su at 10:27 AM