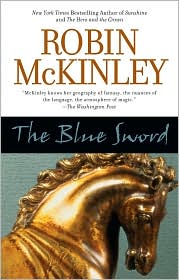 Outlander Harry Crewe, new to their newly colonized homestead in Damar, feels a connection to the deserts beyond her new home…a connection that she doesn’t understand until she meets—and is taken by—the Damarian king, Corlath. For Harry is part of a prophecy that tells of a female warrior’s destiny to save Damar from their enemies. In doing so, Harry becomes a part of a culture that’s strange and mysteriously familiar at the same time, and cannot even begin to comprehend the extent to which her legacy will be imprinted on Damarian history.

Well, they don’t really write high fantasy as they used to, now do they? There has to be a reason that Robin McKinley’s THE BLUE SWORD, first published in the 1980s, is still being widely read and adored, and that is because it is arguably the absolute best in its genre, an unmatched blend of strong characters, political intrigue, and quite simply the best damn fantasy world ever imagined and written.

It’s a little strange for me to read THE BLUE SWORD for the first time, nearly ten years after I picked up The Hero and the Crown and read it to pieces for about four years straight, it having been my favorite book in middle school. THE BLUE SWORD was written before The Hero and the Crown. I can hardly wrap my mind around that! The depiction of the Damarian landscape is incredible: ranging from endless red deserts to the hidden valleys and villages within the mountains. Robin McKinley’s language is not quite lyrical, per se, but there is a certain hypnotic rhythm that her descriptions possess. That, combined with the scope of the worldbuilding—the politics, myths, fashions, traditions, everyday duties—is entrancing. McKinley inspires awe in readers.

Harry, of course, serves for many as the blueprint of the admirable fantasy heroine. True, at times it feels like the mysterious magic of Damar is carrying her along, instead of her leading it. But her magnanimity, her determination to succeed even as she does not completely understand what’s happening to her, is inarguably admirable. Corlath’s appeal, I think, comes less from his specific characteristics, and more from his inexplicable status as the archetypal complement to Harry’s heroine role. However little or much we perceive of Harry and Corlath’s personalities, beliefs, or desires, however, they are a pair for whom we feel absolute sympathy.

I have little more to say because I feel like this is one of those instances where the more I try to examine what made this book move me so, the less impressed I will be by it. So I’ll just say that the scope of what it accomplishes is unparalleled, and if you read it at the right stage of life—say, on the brink of adolescence, just when you’re searching for a role model—then THE BLUE SWORD will undoubtedly become your bible of sorts.


Cover discussion: McKinley's books have so many different covers each. I like the design of this edition. It's uniform and hints at epic majesty without feeling too heavy or too light.