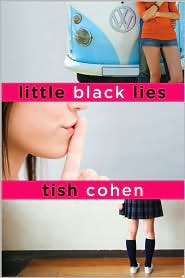 Sara Black is the new girl at the nation’s most intensely academic public high school, where her father is the new janitor. With super competitive classmates who won’t give her the time of day, a mother in France with her new lover, and a father in OCD, it’s little surprise that Sara begins telling lies to maintain her sanity and reputation.

As she falls in deeper with a group of the school’s most intimidating girls, however, Sara’s lies grow and grow until she has trouble keeping them straight. She’s running the risk of breaking her father’s heart and having her reputation permanently ruined as one of the most popular girls in the school decides to look into Sara’s stories…

LITTLE BLACK LIES is a high school drama-filled novel, similar to Gossip Girl except without the same high level of sexual escapades, and set in the most unusual of locations: a nerdy public school. Don’t let the academia fool you, though: the girls are still as bitchy, the drama still as intense.

The characters in LITTLE BLACK LIES, while not immediately endearing, still grow on you after about halfway through the book. We can feel for Sara as she navigates life without her mother, in a new school full of classmates who would do nearly anything to beat their friends. The stresses of her new life make Sara’s lies and actions justifiable, though not necessarily admirable. I particularly admired Cohen’s treatment of OCD in this novel, as a disorder that breaks hearts, strains relationships, and pushes teens to lie for the sake of preserving their social status.

I mentioned earlier that I thought it was a watered-down version of Gossip Girl. There are definitely still bitchy girls who manipulate, blackmail, and hurt one another. While the antics of the Anton High “in” crowd of are amateurs compared to other mean girls in media, they’re still believable enough, and you will still feel for Carling, the head mean girl with the bad family life, despite her manipulations. Cohen generally succeeds at balancing readers’ hatred of and caring for these characters.

LITTLE BLACK LIES will appeal to a wide range of teenagers who can identify with Sara’s difficulty in balancing her family life and school life. It’s a good story, and even if it took a while to get to its feet, my nervousness for what will happen to Sara in her huge, tentative house of lies kept me reading into the night.

Cover discussion: 3 out of 5 - It's alright. The bottom third panel is the most relevant to the story, but overall the composition--the streaks of hot pink, the half-there photos--would make me pick this book up out of interest.

Thanks, Stephanie at EgmontUSA, for sending me an ARC for review!
Posted by Steph Su at 8:49 AM

Email ThisBlogThis!Share to TwitterShare to FacebookShare to Pinterest
Labels: 3, review, tish cohen, YA