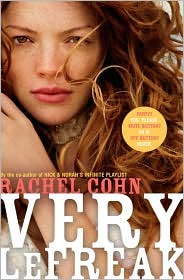 Columbia University freshman Very LeFreak is a vivacious, confident girl, the life of the party and eternal schemer of outrageous activities. True, her busyness makes her rather scatterbrained, non-academically inclined, and a bit of a heartbreaker. But that doesn’t really matter, because her heart’s taken by El Virus, the mysterious man she “met” on the Internet and is madly in love with. Trouble is, Very hasn’t heard from El Virus in weeks and months, despite the fact that she is constantly checking her phone, email, and IMs to see if he’s contacted her. When her technology addiction begins to seriously negatively affect her real life, Very decides to go on a mission to discover the whereabouts of El Virus.

VERY LEFREAK is an unfortunate disappointment by a highly respectable author. It contains the chatty, witty, and pop culture reference-loaded writing of her previous books, but lacks cohesion and the ability to make us empathize with the characters.

Very is an appealing character because her thoughts—and therefore her narration—are refreshingly fast-paced, modern, and slightly scattered in the way that many 21st-century teens are, whether we admit it or not. She is unlike any character I’ve encountered in literature before, with her ever-ready repertoire of pop culture, random tangents, and connections we’d never make ourselves, but which seem perfectly logical coming from Very’s mind.

However, the fact that we are in Very’s head so much makes it extremely difficult for us to grasp what is going on in the story. Very’s observations are certainly interesting, but there is a lack of narrative cohesion tying together Very with the people in her life. The little we glean of Very’s friends is so colored by Very’s desires for who she wants them to be that we don’t get even close to a solid picture of who they are. While I understand that this may in fact be the manifestation of the typical limitations of fiction writing—everything we know about the characters, we know through a biased lens—the paradox doesn’t completely translate into reader enjoyability and comprehension here.

Similarly, there seemed to be a lack of plot in VERY LEFREAK. The book is so much a dissection of Very’s thought processes that it oftentimes forgets to effectively move the story along via relevant events, conversations, and even overarching themes. The technology addiction that the book’s synopsis claims Very suffers from actually doesn’t even play a major role in the book—which disappointed me, as I thought it was an interesting and pertinent topic that could’ve better been explored. I read about half of the book before realizing that absolutely nothing pertaining to character growth had happened yet. One can get away with that in an adult book, but for YA fiction, that just might be the kiss of death.

Overall, I believe VERY LEFREAK might be an interesting read for writers and academics curious about issues regarding fiction’s metalanguage—are the supporting characters really incohesive, or is that just a product of the intensely close third-person narration of this book? Can a story be a story without character development or plot?—but I fear it may be a struggle for the YA audience it’s being marketed at. Appreciators of well-written, character-driven novels might give this one a go and find that they enjoy it immensely.


Cover discussion: 2.5 out of 5 - I do like the style, the whimsical feel of it, but that is not AT ALL how I pictured the vivacious and ineffable Very to look like.

Review copy received from publisher.
Posted by Steph Su at 11:33 AM

Email ThisBlogThis!Share to TwitterShare to FacebookShare to Pinterest
Labels: 2.5, rachel cohn, review, YA