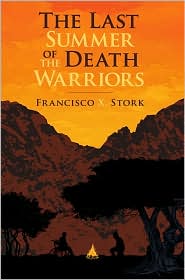 The Last Summer of the Death Warriors by Francisco X. Stork

When Pancho arrives at St. Anthony's Home, he knows his time there will be short: If his plans succeed, he'll soon be arrested for the murder of his sister's killer. But then he's assigned to help D.Q., whose brain cancer has slowed neither his spirit nor his mouth. D.Q. tells Pancho all about his "Death Warrior's Manifesto," which will help him to live out his last days fully--ideally, he says, with the love of the beautiful Marisol. As Pancho tracks down his sister's murderer, he finds himself falling under the influence of D.Q. and Marisol, who is everything D.Q. said she would be; and he is inexorably drawn to a decision: to honor his sister and her death, or embrace the way of the Death Warrior and choose life.


Nuanced in its characters and surprising in its plot developments--both soulful and funny--Pancho & D.Q. is a "buddy novel" of the highest kind: the story of a friendship that helps two young men become all they can be. [summary from B&N.com]

I just read Marcelo in the Real World and all I could think was, why didn't I read this sooner? It was an incredible novel. The characterization was effortless, and the story was sweet and memorable. Francisco Stork is a genius writer destined to be known among the greats such as Laurie Halse Anderson in his ability to write about tough subjects yet create reader empathy for the characters. I don't think it will be possible for me not to like this book!

The Last Summer of the Death Warriors will be published in hardcover by Scholastic on March 1, 2010.
Posted by Steph Su at 9:17 AM