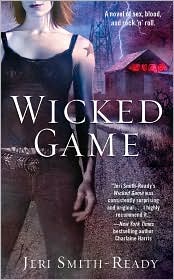 In order to put her con artist days behind her, twenty-something-year-old Ciara Griffin takes a marketing internship at the local radio station. She soon discovers, however, that the DJs are all vampires! Vampires are trapped in the time at which they died and so need to be immersed in the culture of that particular era in order to stay sane. Unfortunately, the owner of the struggling radio station is considering selling it to the generically commercial Skywave megacorporation, which would mean the end of “life” for the vampires.

Ciara comes up with the bold and daring idea of “outing” the vampire DJs to increase the station’s revenue. After all, no one is going to truly believe that the DJs are vampires—it will just make a great marketing ploy. Ciara’s idea is a success, and she even begins to get close to one of the vampire DJs, the hot and sensitive Shane McAllister.

There are some vampires, however, who don’t like what Ciara has done to WVMP and the safe anonymity of the vampires…

Calling all fans of smoldering romance, sassy heroines, and badass vampires: this brilliant series by Jeri Smith-Ready is sure to make your year! Not since Richelle Mead’s Vampire Academy series have I read a vampire book that’s so hot, funny, intelligent, and well written.

If you like your protagonists bold and witty, look no further than Ciara Griffin. Her irreverent narration makes WICKED GAME a nonstop entertaining and mindblowing read. Ciara is a remarkably well-developed heroine: not only is she an original thinker who exudes appeal in the here and now, she also has a tender family history that is almost always subconsciously at odds with the woman she has turned herself into after her complicated childhood. This balance of present-day confidence and psychoanalytical complexities ensures that readers will never tire of learning about Ciara and following her around.

Fans of the HBO hit show True Blood will LOVE Jeri Smith-Ready’s vampires. No more are they impeccably perfect and sparkly. These vampires are dangerous: the risks that Ciara takes on with her job and romantic pursuits are almost deliciously tangible. At the same time, the vampires are also flawed, neurotic in their compulsions and need of staying connected with their era. It is this weakness, this humanity in these vampires that make them appealing and all the more “realistic” to paranormal fans. I don’t think I speak only for myself when I say that I’m bored by perfect paranormal creatures and naively “innocent” romances between humans and supernaturals. Toss in a hint of danger—that lethal combination of supernatural superstrength and human vulnerabilities—and you really crank the heat up in the romance and action departments.


Cover discussion: 2.5 out of 5 - As far as covers go, it's not that exciting. But this style is typical of many paranormal romances, and it's what's inside that counts!

This copy was not provided for me by the author or publisher.
Posted by Steph Su at 5:30 PM