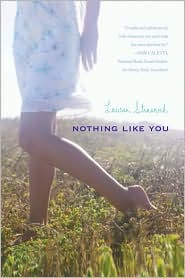 Torn apart by her mother’s recent death, Holly loses her virginity to Paul, one of the most popular guys in school. Holly assumes that once it’s over, she’ll go back to hanging out with her only friend, Nils, the boy-next-door turned “man-slut,” and Paul will go back to his long-term on-and-off girlfriend, Saskia. But suddenly Paul keeps chasing her, and Holly’s actually becoming friends with Saskia, who turns out to be a great girl who doesn’t deserve all this, and suddenly Holly’s in way over her head, dreading the moment when everything will come to a head and fall apart around her.

NOTHING LIKE YOU, Lauren Strasnick’s debut novel, is relatively short, but packs one heck of a punch between its covers. It is a powerful read that will wreck your nerves, put them back together, and wreck them all over again.

Lauren Strasnick’s succinctness with words is still a relatively rare gift in YA lit. Sometimes, less is more, and it certainly is so in Holly’s words: little time is spent dallying over inner monologues, and instead we are thrown right into Holly’s words and have to quickly learn our way around her friends, family history, and romantic problems, otherwise we’ll unhappily sink and miss the point of the book. I like how Lauren’s writing style doesn’t undervalue the reader’s intelligence: we are all capable of figuring out what’s going on, and it is this agency on our part that will make us invest more in Holly’s story. Who says it’s the author who needs to do ALL of the work?

This may be personal preference, but I adore Holly’s character. In particular, I love how relatively upfront she is about her emotional concerns. This is a girl who’s not afraid to express to others how she’s feeling, instead of bottling it all up inside her, so that her problems are constantly evolving and moving forward. It’s a trait that I envy, and so it’s refreshing to read about such a girl in YA lit.

Holly and Nils’ friendship was well done, specifically in that you can practically feel the chemistry crackling between them. In contrast, Paul feels a little underdeveloped. He is definitely a douchebag but I wanted to know why he feels like he needs to behave that way. NOTHING LIKE YOU further defies our expectations of contemporary literature with its unusual ending, which, like every other part of the book, garners its power from its absence of flair for the sake of grabbing attention.

True, Holly’s mother died, and a lot of her behavior is in reaction to her grief, but this is not explicitly a story about dealing with grief, for which I am grateful. Instead, it’s simply an honest and refreshing tale of contemporary emotions. Lauren Strasnick has embedded herself into my heart with her unassuming debut novel, and I have no doubt that she will do the same to others. 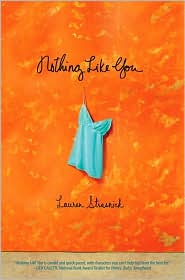 Cover discussion: 3.5 out of 5 - I am a sucker for pretty covers, and this is no exception, even though it doesn't really have much to do with the story as far as I'm concerned. But still... pretty! The hardcover (picture left), is very different, but struck me especially because of the textured background. Either one of these covers, along with the synopsis, would've made me pick it up.

Copy sent for review by author. Thanks, Lauren!
Posted by Steph Su at 10:00 AM

Email ThisBlogThis!Share to TwitterShare to FacebookShare to Pinterest
Labels: 4, lauren strasnick, review, YA