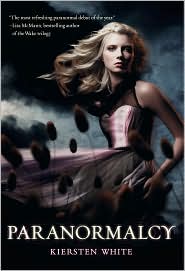 16-year-old Evie, the only known human who can see through paranormals’ glamours, works for the IPCA, capturing and tagging stray paranormals in an effort to keep track of them and keep them under control. This is normal life for her, until the day a shapeshifter boy like nothing she has ever seen breaks into headquarters and is captured. Against her boss’ wishes, Evie befriends the shapeshifter, named Lend, who forces her to question her role in the IPCA. Does she really have free will, or is she as trapped as the paranormals she captures?

On top of that, however, it appears that there is something out there that is threatening the existence of all paranormals…and Evie might be in the center of it, if the fairy Reth’s extra attention towards her is any indication.

PARANORMALCY is a fun, fast, and furious new read, a wonderfully fresh addition to the YA paranormal genre.

Kiersten White’s debut novel contains elements that will appeal to both the girly and the tomboyish. For instance, Evie has an incredibly female-power role of policing paranormals, getting to kick butt and show off her combat skills. But at the same time, she also LOVES her fair share of girly stuff, from the color pink, to fashion, to flirting with cute boys, to naming her belongings. Evie’s snarky but assuredly feminine narration had me grinning like an idiot from cover to cover. I typically don’t even like girly-girls all that much, but Evie’s personality balanced the book’s darker, more sinister plot.

PARANORMALCY is not your typical YA paranormal read: indeed, it has more in common with an elaborately written adult urban fantasy series. While the book doesn’t dive too deeply into the potentially interesting topics such as what the world outside of IPCA headquarters looks like, I appreciated how it brought up thoughtful questions about the distinction between employer vs. prisoner, true free will vs. imposed (though still broad) boundaries, and more. Kiersten White has created a marvelously complex paranormal world that I’d be excited to read more about in sequels.

Bringing the feminine to the gritty urban fantasy genre or complexity to an already female-oriented paranormal genre—whatever way you like to spin it, PARANORMALCY is one heck of a great read. Evie’s story reads smoothly, a breath of fresh air. I can’t wait for more!


Cover discussion: 4.5 out of 5 - Wow. Talk about gorgeous. The girl's a little fiercer-looking than I imagine Evie to be, but I love how the darkness of this cover accentuates that part of the story, while, y'know, in the story, Evie's girlishness holds her own. Chyeah.

ARC received from Around the World Tours.
Posted by Steph Su at 11:43 PM