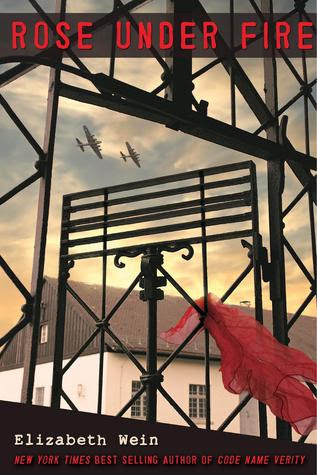 While flying an Allied fighter plane from Paris to England, American ATA pilot and amateur poet, Rose Justice, is captured by the Nazis and sent to Ravensbrück, the notorious women's concentration camp. Trapped in horrific circumstances, Rose finds hope in the impossible through the loyalty, bravery and friendship of her fellow prisoners. But will that be enough to endure the fate that’s in store for her?

Elizabeth Wein, author of the critically-acclaimed and best-selling Code Name Verity, delivers another stunning WWII thriller. The unforgettable story of Rose Justice is forged from heart-wrenching courage, resolve, and the slim, bright chance of survival.

For me, Code Name Verity's domination of the YA literary scene came about not from its compelling premise and thriller-like aspects, but from the strength of Elizabeth Wein's writing, of her writing voice. Which is why I never had a doubt that ROSE UNDER FIRE wouldn't be excellent. To have what the narrative voice that I associated with Julie/Maddie in CNV seemingly transplanted onto Rose was a little jarring at first for me--but then Rose's own unique brand of strength emerged, roaring, and fed my readerly sympathies and investment. She is smart, resilient, and a much more resonant writer than she gives herself credit for... in other words, exactly the kind of YA heroine that can win hearts anywhere.

ROSE UNDER FIRE deals with a particular dark chapter of World War II history: Nazi doctors performing torturous experiments in the name of "scientific advancement" on young prisoners. The very idea alone is chilling enough, but ROSE UNDER FIRE stays clear of historical moroseness and heavy-handed eulogizing by ensuring that its focus stays clearly on the characters. Rose is joined on the page by more admirable female supporting characters than I can keep track of. What Wein does so well in her two WWII historical novels is that she doesn't merely let the characters' predicaments demand readers' sympathies: rather, the characters--big-hearted, smart-mouthed, brave or frightened--and the empathy they deserve speak for themselves. These are characters we would like anywhere, in any story, in any time period.

Elizabeth Wein has accomplished what few YA writers have yet to do, and that is to make historical fiction popular and resonant. If she continues to write historical fiction, I'll for sure be glad, but I'd also be happy with whatever else she chooses to write in the future. Her surehanded characterization and narrative voice have made me a fan through everything.

Cover discussion: I feel like it changed quite a bit from the hardback cover for Code Name Verity, and I don't know how I feel about it. Still, I appreciate that it's different from most of the other YA covers out there. Its illustrated quality belies the fact that most of the book takes place under the most chilling conditions.

ARC received from publisher for review. Thank you!
Posted by Steph Su at 7:00 AM 7 comments: