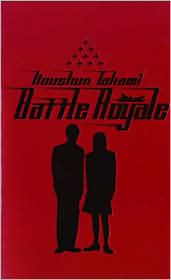 Tags: dystopian lit, violence, killing
Rating: 4 out of 5
Summary
In the Republic of Greater East Asia, a frightening event called the “Program” takes place once a year in order to keep the citizens compliant and distrustful of one another. Third-year junior high classes are randomly selected throughout the nation, relocated to an isolated area, and forced to kill one another until just one survivor—the victor—remains.
This year, it’s 15-year-old Shuya Nanahara’s class that gets chosen and relocated to a small island. Shuya is forced to watch his friends die and his classmates go crazy. But what if there were some way to beat the fascist government’s supposedly infallible system?
Review
BATTLE ROYALE is brutal, both physically and mentally. It tosses you into the middle of a corrupt world and forces you to be witness to an event that’s deadly and well established. Innocent and not-so-innocent teenagers die every few pages in unapologetic prose. No sooner do we come to know a student’s personality and past when he or she is killed, the abruptness of losing someone interesting you’ve just begun to know a definite stomach-turner, a definite shake-up.
If this kind of dystopian literature is your kind of thing, there’s plenty of it to be had. Even if you’ve got a weak stomach for violence, however, BATTLE ROYALE still gives you a lot to think about. Koushun Takami’s writing is nothing striking, and yet there’s something about the plainness of it, the bluntness of the translated version that I read, that gets inside your veins and messes up your organs. It’s the way he gives us a brief character sketch of each of the 42 students—and then takes them away from us in horrifying manners. It’s the way that this book’s world takes the existence of the “Program” as expected, unchangeable. And it’s the way that this book makes you doubt yourself and the characters, not sure whom you should trust, just as the government intends for you to react.
This book has inevitably been compared to THE HUNGER GAMES, so why not say what I think about the two? THE HUNGER GAMES is clearly YA: readers are spared the too-gruesome details and, through the eyes of Katniss, are spared the intensity of the horror that arises when a character whose history you know dies. BATTLE ROYALE is a stand-alone novel, which makes its shocker of an ending all the more satisfying; while I have yet to read the next two books in Suzanne Collins’ series, I can only hope that she will deliver an equally believable and satisfying answer for Katniss and her world.
If I had to make a choice between the two, I’d go with THE HUNGER GAMES, for its less stomach-churning material and the successful development of memorable characters. However, BATTLE ROYALE provides more questions to think over, more disturbing ideas and images that will keep you up later in the night. If you do not have a weak stomach and have the time to read an intense 600-page work, I suggest picking up BATTLE ROYALE in order to completely annihilate everything you’ve previously thought about the dark side of human nature and our curiosity in violence and death.