Review (SS3): The Treasure Map of Boys by E. Lockhart 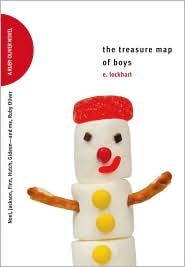 Ruby Oliver, Book 3
Publication Date: July 28, 2009 (Random House)
Tags: YA, high school, drama, friendship, angst
Rating: 4.5 out of 5
Summary
Now in the second half of her junior year, Ruby Oliver seems to have reached a sort of satisfying plateau in her social standing. No longer a social standing after the incident with the boyfriend list in sophomore year, Ruby now has several friends, of both genders—but, alas, she still does not have a boyfriend!
This is not to say that she doesn’t have any prospects. A school bake sale she runs prompts several guys to participate, and to maybe show an interest in her. Roo also can’t decide how she feels about her ex, Jackson, newly single after breaking up with Roo’s ex-best friend, sending her more gifts and always hanging around her. And finally, she has trouble interpreting the actions of Noel, her friend and someone she may like.
But then things get worse—much worse. And suddenly Roo is back in a position of trying to figure out who her true friends are, and whether or not she is a good person after all.
Review
E. Lockhart’s Ruby Oliver books are, quite simply, some of the best studies of high school platonic and romantic interaction that ever exist. What I love about Roo and the books about her are how thoroughly and realistically complex the characters are. Teens do a lot of crazy things in high school, and there are never easy explanations for their motivations. Similarly, Roo is constantly trying to analyze her behavior and decide whether she is being a normal teenage girl or a horrible person.
This kind of three-dimensional psych study isn’t just limited to Roo, however. All of the other people in Roo’s life—with the exception of the adults—are prime candidates for loads of discussion. What makes them do what they do? Are they right to put so much blame on Roo for things going badly, or are they themselves also partially at fault? All the questions that teens subconsciously must answer in high school, and yet rarely have the ability to voice as clearly as Roo does.
The excellence doesn’t stop there, either! E. Lockhart not only creates wonderful characters, she also writes humorously. Roo has a habit of using footnotes liberally to either go off on tangents that usually involve cinema knowledge or to make a funny and/or informative note. The result is a book that is easy yet fun to read.
Due to E. Lockhart’s insightful observation about the behaviors of teenagers in a small school, as well as Roo’s admittedly dramatic life, the Ruby Oliver books would make great presents for teen girls who read a lot of manga but not many actual novels. The situations involving friends and love interests will be familiar to them, and the language will be accessible and enticing. And at the same time, there are plenty of smarts in this book to win anyone’s heart. If you want to relive those painful high school years of confusing and crazy emotions, this is a great series to pick up.

Similar Authors
John Green
Megan McCafferty
Diana Peterfreund
Michele Jaffe
Writing: 5/5
Characters: 5/5
Plot: 4/5
Want more? Yes--not only because I love Roo, but also because the ending just begs for another saga to be written.
Overall Rating: 4.5 out of 5
Cover discussion: 4 out of 5 - I love these covers! If you've read the previous Ruby Oliver books, you'll know that they're all pretty similar, with the white backgrounds, unassuming font, and the one simple "toy". Love it. They look great together, and they're definitely recognizable.
Posted by Steph Su at 11:07 PM