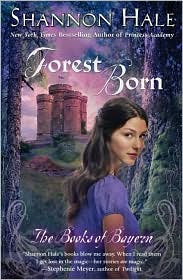 All her life, Rin has unquestioningly helped her Ma out with the many chores required of her to take care of her large family in the Forest. Rin has always found comfort within the trees, but when the trees seem to turn against her, Rin goes with her older brother, Razo, into the city, hoping to put an end to the unsettled feeling within her.

However, Rin soon finds herself in the midst of a mysterious political situation as she accompanies the “Fire Sisters”—Isi, Enna, and Dasha—to a neighboring country following the reports of strange magical occurrences. Little does Rin know that it may be up to her and her as-yet-unrealized abilities to save the day for them all…

FOREST BORN is a welcome return to the beloved world of Bayern as Shannon Hale shows again why she is one of the decade’s top YA fantasy writers. Featuring ever-lush writing, wonderful characters, and heartwarming character development, be prepared to step into Bayern once again!

With her timidity and extreme lack of self-esteem, Rin is a far cry from the other Bayern characters. However, Rin is never overshadowed by the other, more talkative, and more assertive characters, mostly because we are so invested in Rin’s well-being and watch with happiness as she grows into understanding herself. Rin’s quietness—not to mention her ability—makes her a careful and meticulous observer of people, and even when previous Bayern characters like Enna seem one-dimensional to the point of being caricatures of their former selves, Rin is reliably steady in her thought process and contemplation.

The Bayern fan within me really appreciated how FOREST BORN discusses an aspect of the world that has appeared in her previous books but has not been fully addressed until now. With the believable and shivers-inducing return of an old nemesis, the Bayern books seem to return full circle, and it delights me that Rin—gentle, unassuming Rin—is the one who wraps up the mystery surrounding this very curious recurring issue. To be more specific would be to spoil the goods for you, so fans of the Bayern books should definitely read this to better understand what I’m talking about.

Perhaps the best part of Hale’s novel is, of course, the writing. It’s gorgeous without losing sight of the plot and themes; poetic without letting the language direct the story. Hale’s language makes the world of Bayern a romantically mysterious place despite the truly malevolent terrors within, and it’s a world we want to sink into for a whole day’s worth of reading.

FOREST BORN may be the highly satisfying fourth book in Hale’s Books of Bayern series, but I think I am not alone when I say that I would not be loath to more books in the series. Shannon Hale proves once again that her writing abilities make sure that previously done worlds never get stale, and that you can always write a beautiful and memorable story out of old ideas.


Cover discussion: 2 out of 5 - I will, I think, always prefer the old covers of this series to the new covers, but *shrugs* what can be done? That is definitely not how I picture Rin, though the background is rather pretty.

Thank you, Anna, for sending me a copy for review!
Posted by Steph Su at 11:00 AM