Team Peeta vs. Team Gale?
Oh, you thought it would be something more substantial and serious? Well, TOO BAD for you! Hah! YA authors Heidi Kling and Josh Berk are hosting a Smoochies Award for the Best YA Kiss of 2009. Sound hot already, right? You should check it out, and nominate by February 13!

Anyway, tangential to that, I started reading other people's nominations, being as this is a topic that I am very curious about *shifty eyes*. I noticed that quite a number of people mentioned the Gale/Katniss kiss, which prompted me to post on Twitter:


lmao reading Smoochie nominations. Did Gale & Katniss even kiss? I forget: that's how uneventful it was to me. 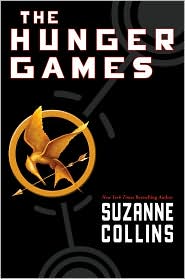 Which, of course, promptly got me into some "trouble" with some tweeters. Jessica of Chick Lit Teens and I ended up going back and forth about this. To summarize, she's Team Gale, while I'm Team Peeta. BUT! We are both moderate in our positions, and can be swayed. (In fact, I'm more of a Team Katniss gal. I remember Heather Zundel asking on my "Best Romance" 2009 book list something along the lines of why I hadn't included Catching Fire on that list. To which my answer is: because it isn't ROMANCE. It's a dystopian novel and that's the best and main thing about it. Bah.)

For logic's (and sanity's) sake, I will compile a list of Team Gale vs. Team Peeta. Please note that I am trying to be as fair as possible to both sides. I quite enjoyed the thing that occurred on Chelsea the Page Flipper's blog a few months ago, during which lots of people weighed in one which team they were on. But... but... I like both! And here's why:

Oh yeah, WARNING: Don't read this if you haven't read the first two books, or if you don't care to know about my theories for what will happen in Book Three. Thx.

Why I Can't Rule Out Gale

Why Gale Annoys Me

Now you've heard my thoughts on the matter, and now you even--if you read it--know what I think might happen to this love triangle in Book 3. What else would you guys add to any of these lists? Is there anything that you disagree with me on? What do you think will happen in the final book? I'd love to hear!
Posted by Steph Su at 4:58 PM