Today I'm hosting Jenny Davidson, author of The Explosionist and the recently released Invisible Things, as part of her Traveling to Teens tour for Invisible Things! I was supposed to also post a review but unfortunately school caught up to me, so I hope to be able to do that maybe in the future. :( However, I'm lucky enough to have Jenny stop by and answer a few questions for us. Welcome, Jenny, to Steph Su Reads!

1. Your books are set in an alternate-history Europe, with a combination of steampunk and magic elements. Do you have any favorite steampunk books? Magic books?

Magic books: too many to count! Diana Wynne Jones is a particular favorite, as is Robin McKinley. Two of my inspirations for The Explosionist & Invisible Things were Philip Pullman and Garth Nix - I had read the His Dark Materials trilogy and the Abhorsen trilogy and wanted to write something that I would like as much as I liked those...

Steampunk books: I like The Difference Engine, which I think is one of the classics of the steampunk genre; but the book I really love is Neal Stephenson's The Diamond Age.

2. There is a large cast of interesting characters in your books. Which character was the hardest to write?

Sophie is the easiest character for me to write, since she is much like me. I guess in certain respects Mikael is the hardest - he has to be a real living teenage boy, and as vivid to the reader as he is to Sophie, and yet there are things that Sophie doesn't really know or understand about him. 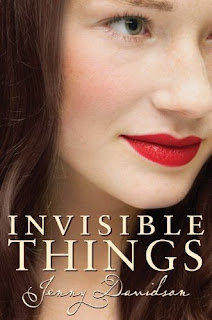 3. Can you tell us about your academic job at Columbia University?

I have been teaching at Columbia for about ten years now - it was the first job I got out of graduate school (I did my PhD in eighteenth-century British literature at Yale). I love teaching at Columbia - the students are absolutely fabulous, and New York is the best place to live that I can possibly imagine. The craziest class I teach is probably a seminar on Samuel Richardson's novel Clarissa, which is almost a million words long - it is an enthralling and strange reading experience, a bit like delving into Proust's also massively long novel In Search of Lost Time.

4. Who are some of your favorite authors?

I've already named some of my favorite YA authors. I love all different kinds of books. Favorite crime writers include Peter Temple, Ken Bruen and Lee Child; I am always excited for a new novel by Jonathan Lethem, William Boyd, Mary Gaitskill.

5. What is the most memorable vacation you have ever been on?

There are a few contenders: I had an amazing trip to Russia in the summer of 2000, for instance. But I think I will have to say that the most unusual vacation I ever went on was the trip I took a year and a half ago to run a marathon in Antarctica! There was this moment where the expedition director told us over the intercom to look out over the side of the ship, and there was an ice floe with an enormous seal just sunning itself on top of the ice - we saw whales and seals of all sorts, and vast numbers of penguins. The ice in Antarctica is an amazing pale blue, like Windex meringue.

6. Recommend to YA readers some classic, non-YA works of literature they should read.

I think my two absolute favorite classic novelists are Jane Austen and Charles Dickens. A YA reader who has not read Emma or David Copperfield has treats in store! I also reread War and Peace this summer, and I must say that I think it is an enthralling page-turner - truly a novel in which one immerses oneself with delight and pleasure.

Thanks, Jenny! That trip to Antarctica sounds SO cool; wish I could do that. Be sure to check out the rest of Jenny's tour! 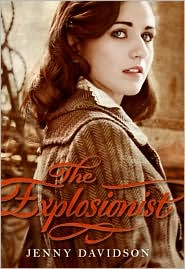 A series of mysteries.

An explosion of truths.

The Explosionist: Someone sets off a bomb outside fifteen-year-old Sophie's boarding school, but no one can figure out who.

The Medium: Soothsayers and séance leaders are regular guests at her great-aunt's house in Scotland, but only one delivers a terrifying prophecy, directed at Sophie herself.

The Murder: When the medium is found dead, Sophie and her friend Mikael know they must get to the bottom of these three mysteries in order to save themselves—even as the fate of all Europe hangs in the balance.

Set in a time of subversive politics, homegrown terrorism, and rapidly changing alliances, The Explosionist is an extraordinarily accomplished debut novel for teens that delivers a glimpse of the world as it might have been—had one moment in history been altered.

Sixteen-year-old Sophie knows there is more to the story of her parents' death. And she's on a mission to find the truth. To aid her in solving the decades-old mystery, Sophie has enlisted her best friend, Mikael, whose friendship has turned into something more. It's soon clear that Sophie's future is very much wrapped up in the details of her family's past, and the key lies with information only one man can provide: her parents' former employer, the elusive billionaire Alfred Nobel.

As the threat of war looms in Europe, dangers to Sophie and her loved ones grow. While her determination to solve the mystery doesn't waver, forces beyond her control conspire to keep her from her purpose. Then, news of her great-aunt Tabitha's death sets off a chain of events that leaves Sophie questioning everything.

The more Sophie learns, the more she realizes that nothing—and no one—in her life is what it seems. And coming to terms with the dark secrets she uncovers means imagining a truth that she never dreamed possible. Full of gorgeous settings, thrilling adventure, and romance, invisible things is a novel that dares to ask, what if?

The Explosionist is now available from HarperTeen, and Invisible Things will be available from HarperTeen on November 23, 2010. You can, however, also enter for a chance to win a hardcover of The Explosionist and a signed ARC of Invisible Things! To enter, please fill out the form here, making sure to answer the question relevantly. This giveaway is open to US mailing addresses only, and ends Friday, December 10, 2010. Good luck!

Don't forget to check out the rest of the blog tour schedule on Traveling to Teens.
Posted by Steph Su at 11:13 AM