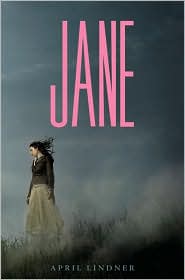 Her parents dead and her cold older siblings unwilling to provide her with financial support, college student Jane Moore is forced to take on a nanny job at Thornfield Park, home to Nico Rathburn, one of the world’s most famous rock stars who is about to make his comeback from years of partying and drama. As Jane gets to know Nico, she finds that, against her practical nature, she is drawn to him. But they seem to be so different in both class status and personality, and even bigger secrets will keep them apart once they come to light…

Fans of the Charlotte Bronte original will no doubt cheer for this loyal modernization of Jane Eyre. For those of us who are more ambiguous about how we feel about Jane Eyre, however, JANE does little to convince us otherwise.

What April Lindner does best in JANE is capturing the mood and tone of the original story. The tormented romance between the Janes and their employers, the enigmatic attractiveness of the Mr. Rochester character…it’s all here.

What’s missing in JANE, however, is Jane’s inner passion, a part of her that is all too easily overlooked, especially if you’re me and was lukewarm about the original. In Jane Eyre, readers see a fierce determination within her to stay true to herself and speak to her mind. Grown-up Jane, in turn, retains some of this passion and drive, even though on the surface she seems submissive. Jane Moore, on the other hand, starts out as a rather passive and flat character and remains so throughout the story. She feels like she was born an old lady, instead of like how Jane Eyre learned how to hide her fieriness.

Jane Eyre was no Pride and Prejudice for me, and I think that’s what makes it and all subsequent retellings still difficult for me to immerse myself in. I think most people either love or don’t care for Jane Eyre, and the divisions will most likely still stand for this modernization. Bronte fans will cherish the familiarity of this story—the tormented Nico Rathburn, Jane’s levelheadedness, their slowly unfolding romance. And thus the very things that bother people in Jane Eyre will most likely still bother them in JANE. Give the book a try: it’s superbly written and up to the original’s standards, but there’s little it can do to convince you to love it if you weren’t a fan of Jane Eyre in the first place.


Cover discussion: 3 out of 5 - Moody, solitary, and evocative. Just like the story. The pink was a little unexpected, though... especially when I saw that the inner hardboard is the same color pink as the title as well.

Email ThisBlogThis!Share to TwitterShare to FacebookShare to Pinterest
Labels: 3.5, april lindner, review, YA