Review: The Unidentified by Rae Mariz 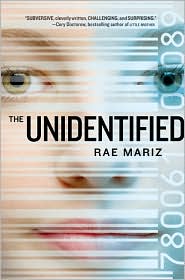 Katey “Kid” Dade feels out of place in the Game, the futuristic school run by Corporations that observe everyone for market research. While her best friend embraces the hectic, consumerist, public lifestyle, Kid isn’t as concerned that she doesn’t have a large number of people subscribing to her stream, or that she is absolutely mediocre by Game standards.

Then Kid witnesses an unauthorized act of rebellion by a mysterious group called the Unidentified and gets pulled into a type of game of its own. What does this group want from the Corporations? Will Kid get played by these groups, or will she and her friends find a way to overthrow the organizations that have an eye, ear, and hand on them at all times?

It’s been a while since I’ve read a book that has impressed me, and so when I picked up and got instantly sucked into THE UNIDENTIFIED’s riveting and eerily familiar world, I was beside myself with happiness. THE UNIDENTIFIED is smart, well-written, and suspenseful, the perfect example of what dystopian literature should be: a fully realized and recognizable world without forgoing characterization and plot.

Rae Mariz impressively introduces us to a shocking and complex futuristic world, one in which privacy has no meaning thanks to the constant flow of information and technological interconnection. With Facebook’s recent introduction of the disconcertingly stalker-like “See Friendship” button, the issues regarding privacy that THE UNIDENTIFIED explores in such an entertaining and intelligent fashion are so much more immediately relevant. Rae Mariz succeeds in crafting for us a scarily plausible world that is possibly an inevitable extrapolation of the already network-filled world of Facebook and Twitter that we live in.

THE UNIDENTIFIED is smart, but it’s also hardly boring. Kid’s voice is fresh, with just the right amount of quippy attitude. She’s the perfect balance of the observant outsider with the propensity to create change, and the gullible market to which the Corporations are pandering. And Kid’s not the only interesting and well-developed characters. Her two best friends, Ari and Mikey, light up the page with their very different personalities whenever they appear in a scene. Even more minor characters are fully realized with their limited “on-page” time. The characterization is really an incredible accomplishment for a 300-something page book, which most might even consider short for modern dystopian novel standards.

I really wish I had the capacity to speak more about THE UNIDENTIFIED’s marvelous critique of the infiltration of networking websites in our lives. But I’ll leave that to the academics, and just let you know that this book does it, along with providing us a highly unputdownable adventure. I don’t think I can recommend this book enough. READ IT if you’re looking for smart and snappy dystopian literature.


Cover discussion: 3.5 out of 5 - I think it was designed to be disconcerting. The genericness of the face (so unlike how I imagined Kid's) superimposed with the bar codes...creepyyy.

Copy borrowed from library.
Posted by Steph Su at 9:45 AM