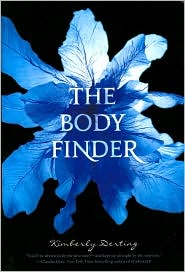 Her whole life, Violet has been able to see what she calls “echoes”: psychic residues imprinted on dead creatures and their killers. Normally she only stumbles across dead animals, but then she is drawn to the bodies of dead girls, and she realizes that there is a serial killer among their community. Teenage girls are disappearing and dying at a horrifying rate, and only Violet, also juggling strange new feelings for her best friend Jay, has the ability to find the killer…even if it means putting herself in great danger.

THE BODY FINDER is a frightening and disturbing debut YA novel—and I use those adjectives in the best sense. The plot is fresh, the romance butterflies-inducing, and—despite its flaws—it’ll be hard to get this book out of your head.

THE BODY FINDER’s unique and suspenseful plot is the driving force behind this book. In between third-person narration that follows Violet around, we get flashes into the killer’s mind, which will make the hair on your arms stand on end—until you realize that the watcher (Violet) has also become the watched, and then you’ll be clutching your blanket in raw fright. The paranormal element is unobtrusive enough to still keep the setting firmly planted in our world, which only adds to the suspense.

Violet and Jay are a delightful pair of main characters. Individually they’re unfortunately not especially stellar: the narration felt curiously distant from Violet, despite her being the protagonist, and she seems like a real wallflower character (not just in her world, but also in the YA genre), not really doing much until external circumstances force her to change. Together, however, their connection is strong, well developed, and believable. It’s rather sad that a YA romance that does not involve insta-lust or a perfect boy chasing after the girl is rare enough to make me sit up and nod my head vigorously in approval, but that’s the truth of the matter. Violet and Jay have definite chemistry going on, and it was a delight to read about them discovering their growing feelings for one another.

So Violet is a little too passive, and secondary characters unfortunately too flat and unbelievable, for me to lose my heart to this book. But if, for whatever reason, you want a book that will raise goosebumps on your skin, check out THE BODY FINDER. It’s a taut thriller with a great romantic sideplot.


Cover discussion: 2 out of 5 - Ehh, I'm not that impressed, unfortunately. They aren't how I pictured the echoes, and if they aren't that, then they just look like moody imitations of the Twilight-esque dark paranormal cover to me.

Out in paperback in February 2011!

Copy borrowed from library.
Posted by Steph Su at 9:54 AM