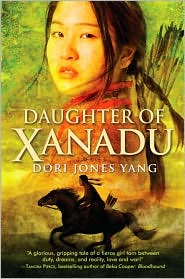 Emmajin is the granddaughter of Kubilai Khan, the fearsome and accomplished leader of the widespread Mongolian Empire. All she has ever dreamed of is to be able to join the Mongolian army, but her destiny as a princess is to be trapped in a political marriage. Emmajin is determined to do all she can to convince the Khan that she will serve him well in battle.

With the arrival of foreign merchants to their lands, however, Emmajin is told to gather information from one Marco Polo. This is the last thing Emmajin wants to do, but as she gets to know Marco, so unlike the Mongolian men she knows, she finds that there is something special about his talented storytelling, his peace-loving beliefs. But how can she juggle her growing feelings towards this foreigner and her determination to become a legend in the Mongolian army?

If you’ve never read anything about the Mongolian empire, then pick DAUGHTER OF XANADU up. Writing in a style easily accessible to modern readers, Dori Jones Yang tells the surprisingly deep story of a girl caught between warring desires, who learns that dreams may change and that things are hardly ever what they seem.

Emmajin undergoes an incredible journey of self-growth, from a girl with a single-minded determination to be a soldier to a young woman with far more complicated feelings and desires. To tell the story of Emmajin’s self-discovery, Dori Jones Yang gives us a world full of marvelously fascinating details, first among the artificial glamour of court life, and then among the gruesome reality of mortality on the battlefield. This transition of her soldier aspirations from dream to reality truly affects Emmajin in ways that we who live many centuries after her time can still empathize with. I was in tears for the last few chapters of the book, so wrapped up in Emmajin’s development I was.

DAUGHTER OF XANADU is a great book if you’re looking for a story featuring a strong female character set in a fascinating “other world.” Expand the range of POC books you read with this one, and be swept away.


Cover discussion: 3.5 out of 5 - There is a beautiful, strong Mongolian girl on the cover!

ARC received from Around the World Tours.
Posted by Steph Su at 10:45 AM