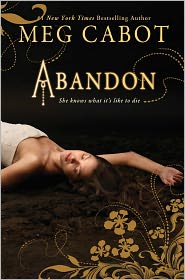 Pierce Oliviera’s life started unraveling the day she died and met the man who she had once met in a cemetery when she was very young. The man, John, occupies a space between the dead and the living, and seems to want to keep Pierce as a companion for himself. However, Pierce managed to escape, although John has continued to show up in her life whenever she least wants him to, and create lots of trouble.

Now, Pierce is trying to start over on Isla Huesos, an island off Florida. Returning to her family’s roots, however, seems to make her life intersect again with John’s…

ABANDON is the first book in Meg Cabot’s latest YA trilogy, a retelling of the Hades and Persephone Greek myth. Unfortunately, I have found myself less and less satisfied with Cabot’s books, and ABANDON, while marginally better than Cabot’s Airhead series, still uses too many of her usual writing techniques—little forward action, a heavy emphasis on flashback—to endear itself to me completely.

I like Pierce: she is, in my opinion, a little mellower than many of Cabot’s protagonists. And at the beginning of ABANDON I was reminded very much of earlier Meg Cabot books that I loved, such as All-American Girl. Pierce displays a sense of poise that may or may not be the result of her constant encounters with near-death experiences, but nevertheless is very appealing. I even have a tiny little crush on John, who’s protective but not overbearingly so, and really very sweet in his interest in Pierce.

It was the way the story was presented, however, that didn’t gel with me. Practically every other chapter is a flashback. Granted, they are very important flashbacks, explaining how Pierce first encountered John and showing her subsequent (unwanted, but lifesaving) encounters with him and the troubles he has caused for her. However, why does the story have to be presented half in flashback? Pierce’s backstory was so much more interesting than her present story of being the new student at her school, making new friends (or nemeses) of questionable characterization, and slowly uncovering her family’s very melodramatic secret. Why couldn’t the story simply be presented chronologically? I think it might’ve made for a more engaging read, instead of my being frustrated that, once again, Meg Cabot was resorting to cliff-hangery comments that are supposed to pique readers’ interest and have us reading frantically to figure out whatever happened, but instead feels like trickery, a manipulation of our emotions.

Overall, though, I think ABANDON will be a great read for younger readers, particularly those who have read much of Cabot’s books or other paranormal reads. It has an interesting pair of lead characters and decently good writing. I just couldn’t fully get behind the awkward story structure.

Cover discussion: Considering how I cover lusted after this a long time ago, I think it's safe to say that I am attracted to it and just might want a make-out session with it.

Sent by publisher for review. Thanks, Scholastic!
Posted by Steph Su at 10:10 AM