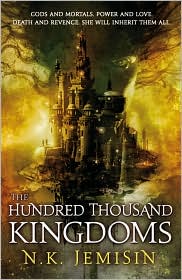 19-year-old Yeine Darr is content being the leader of her father’s people in the High North country. But her Amn mother’s assassination draws Yeine into the politics of the Arameri people. At the palace of Sky, Yeine is, shockingly, named an heir to the Arameri throne, a decision that makes her enemies and will most invariably cut her life short. As she navigates palace life, she also forms a tentative alliance with the Enefadeh, former gods enslaved to the Arameri as the result of losing an ancient battle between the gods eons ago. Her Amn family, the Enefadeh…everyone seems to want something from Yeine, and all of them could cost her her life.

THE HUNDRED THOUSAND KINGDOMS, first in a new trilogy, is first-class fantasy world-building. It’s luscious, dangerous, and impressive as hell, if occasionally dragging in pacing. Still, it is a must-read for high fantasy fans.

My favorite aspect of this book was by far the world-building. N.K. Jemisin succeeds in creating a thoroughly three-dimensional fantasy world, from its religion to its poisonous political factions. And all of this is nestled in the delectably increasingly claustrophobic setting of Sky, the castle-city in which all the shenanigans go down.

I struggled a bit with some characterization and the writing style at some points. I think Yeine is supposed to channel the strength and likability of memorable fantasy heroines, but for the most part she simply doesn’t do much to inspire such regard. She is a political pawn, lacking in agency, so I understand that she is limited in opportunities in which to impress, but I still wish there had been more in-the-moment action and a little less reflection on Yeine’s part. My favorite characters were Nahadoth and Sieh, both gods and both stronger personalities than Yeine, and thus interesting to read about whenever they were granted story space.

Additionally, Yeine’s internal speech felt frustrating to me at times. I also understand that this was what had to happen (but I can’t tell you why, since that would be a spoiler), but the more experimental narrative parts are rather jarring if one expects the traditional chronological narration that most high fantasies employ. Likewise, I’m not sure if the experimental narration completely succeeded with me.

Overall, however, I was super impressed by THE HUNDRED THOUSAND KINGDOMS, and will not hesitate to read Jemisin’s future books even despite the elements of this book that didn’t entirely work for me (because I know that that is very subjective nitpicking). Definitely a great book if you’re a fan of high fantasy!