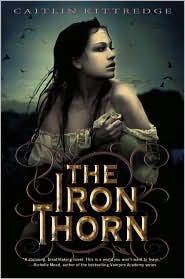 On her upcoming sixteenth birthday, Aoife Grayson is going to go mad. That’s what happened to her mother and her older brother, Conrad, a rare, genetic version of the necrovirus that spreads through their aether-run, Proctor-controlled city of Lovecraft, Massachusetts. Now, her mother is in a madhouse, and her brother has escaped the city. But when Conrad sends an SOS to Aoife, she and her best friend Cal enlist the help of Dean, a street-smart heretic, to help her get to her father’s house in Arkham.

In between avoiding capture by the Proctors, Aoife discovers a shocking secret about the world she knows: nothing is the way it seems, and magic may be more rampant than she ever believed.

THE IRON THORN has its fair share of logistical worldbuilding inconsistencies, but should still be one heck of an adventure for younger, avid readers.

The steampunkish city of Lovecraft exists in alternate-world 1950s, which is always risky and ambitious, because it involves really thorough worldbuilding, and I’m not sure THE IRON THORN really thoroughly accomplishes that. It’s less steampunk than it is a creepy sort of urban fantasy, with the threat of dangerous fey creatures driving the second half of the story. I never entirely felt like the Proctors were frightening, because their appearances throughout the story were so sporadic: it should’ve been much harder for Aoife and her friends to escape Lovecraft, and I never fully got the sense that the Proctors were on her tail, watching her every move.

In addition to worldbuilding inconsistencies, the characters felt a little…off as well. What, exactly, is so endearing about Dean constantly calling Aoife “princess” and remarking on her apparent beauty? It’s creepy. It deserves a slapping. Multiple slappings. And an unexpected twist regarding Cal at the end of the story was the breaking point for me in what was an increasing number of poorly explained “twists.” It felt like an unsuccessful attempt to justify his bratty, bad-friend behavior in the previous 400 pages. It was almost like the story couldn’t decide what it wanted to be—a steampunk? an urban fantasy?—and so it tried to incorporate a bit of everything, with the result that some elements of the story felt a little short.

Nevertheless, Aoife is an admirable protagonist. She’s extremely motivated and determined, and therefore a delight to follow around. She is someone who you could really see accomplishing everything on her own: she just happens to attract the support of friends through her determination.

THE IRON THORN is ambitious, sprawling, and epic. I nitpicked a lot while I was reading because I wanted MORE, but there already is a lot going on in this novel that is impressive and engaging. Recommend it as a gift especially to younger, avid readers who enjoy sprawling adventures.

Cover discussion: It's pretty cool! I think it's a good depiction of Aoife's toughness, as well as the eeriness that seems to permeate Aoife's world.

Sent by publisher for review. 1. Tell us some things that readers will find in The Iron Thorn that aren't mentioned in the synopsis.

An amazing clockwork house, an underground city full of ghouls, an airship crash, a full-on makeout scene—I could go on, but there'd be spoilers!

2. Aoife is an unusual name. How is it pronounced, and how did you decide upon giving your protagonist this name?

It's pronounced Ee-fah, and it's a traditional Irish name. I went to kindergarten with an Aoife, actually, and the name stuck with me, so I decided to give it to my first YA heroine.

3. What would you consider the most interesting writing project you've worked on so far?

Definitely this one. It was amazing to create a whole alternate history from scratch, and use the Lovecraft Mythos twined with actual events such as the Red Scare.

4. If you could travel back to any period in time, where would you go and why?

Assuming I didn't have to stay? And could go home and take my corset off? The Victorian era. It was a time of amazing discovery, innovation, and exploration. Plus, I could visit Meiji Japan and the American West, two of my favorite places during that time period.

5. What do you usually do whenever you need a good laugh?

I look at people and cats being silly on the internet.

6. If you could dye your hair any color you want without any negative consequences, what color would you choose?

Thanks for stopping by my blog today, Caitlin! Check out Caitlin's author website if you're interested in learning more about The Iron Thorn or her other books. And thank you Dominique for putting together this blog tour!
Posted by Steph Su at 9:45 AM