The Traitor in the Tunnel Blog Tour!

If you haven't read Y. S. Lee's The Agency series yet--well, I don't know what to say to you, except that you are missing out on one of the greatest mystery series set in Victorian England that's available today for YA (you can read my reviews of Book One, A Spy in the House, and Book Two, The Body at the Tower). To celebrate the upcoming release of The Traitor in the Tunnel, the third book in the series, Ying, who has a PhD in Victorian literature and culture, is here to talk to my blog readers about a Victorian obsession. Welcome, Ying, to Steph Su Reads! 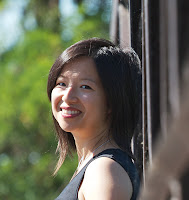 Hello! The blog tour makes two stops today, so I wrote a double-header of an essay. The Victorian Obsession of the day is Purity, and I’ll be talking here about Pure Food and over at The Bookmonsters about Pure Women.

What’s the most disgusting thing you’ve ever eaten? Liver? Slimy, overcooked pasta? Great Aunt Gwendolen’s jello-cabbage salad? I’m here to report that all these things are utterly delicious compared to what poor Victorians ate on a daily basis. In the nineteenth century, milk was frequently diluted with (dirty) water. Bakers mixed wheat flour with cheaper alum powder to bulk out their bread. Meat was often diseased or rancid by the time it reached markets where poor people could afford the prices. Even luxury goods sold on the open market were “adulterated” (the Victorian term). Tea leaves were often mixed with bits of other leaves and twigs, and recycled several times. Candies were brightly coloured with poisonous, lead-based dyes. Is it any wonder that people were suspicious of what they ate?

Makers and sellers of these foods got away with food adulteration, in part because there were very few regulations about what food was: when it was fit to sell, what a recipe – bread, for example - could include, and what additives – like food colouring – were legal. Instead, it was the buyer’s responsibility to recognize what she was getting and not let herself be cheated.

That’s why the purity of food was such a hot topic in the nineteenth century. People now debate the politics of local vs. organic food. But can you imagine the anxiety of trying to figure out whether the jug of milk you just bought is a) fresh, b) from a healthy (undiseased) cow, and c) actually milk?

It’s easy to shudder. But although we now have laws governing food production, there are still tainted-food tragedies. We’re mostly disconnected from where our food grows and how it gets to our plates. And the least nutritious food is still bought by our poorest citizens. Maybe we’re closer to the Victorians than we think.


The most appalling thing I've ever eaten was probably durian. Which I know some people love, but I simply could not force myself to eat very much of the vomit-flavored, custard-textured fruit. Victorian food purity sounds similar to some of what is going on here in China versus food quality control (i.e. it is practically nonexistent). Which is why you get things such as rubber eggs, transparent strawberries, flies vacuum-sealed in with dried meat, and condoms in yogurt. Yum!

The Traitor in the Tunnel is out in hardcover from Candlewick Press today!


Get steeped in suspense, romance, and high Victorian intrigue as Mary goes undercover at Buckingham Palace - and learns a startling secret at the Tower of London.

Queen Victoria has a little problem: there's a petty thief at work in Buckingham Palace. Charged with discretion, the Agency puts quickwitted Mary Quinn on the case, where she must pose as a domestic while fending off the attentions of a feckless Prince of Wales. But when the prince witnesses the murder of one of his friends in an opium den, the potential for scandal looms large. And Mary faces an even more unsettling possibility: the accused killer, a Chinese sailor imprisoned in the Tower of London, shares a name with her long-lost father.

Meanwhile, engineer James Easton, Mary's onetime paramour, is at work shoring up the sewers beneath the palace, where an unexpected tunnel seems to be very much in use. Can Mary and James trust each other (and put their simmering feelings aside) long enough to solve the mystery and protect the Royal Family? Hoist on your waders for Mary's most personal case yet, where the stakes couldn't be higher - and she has everything to lose. [summary from Goodreads]


Y. S. Lee was born in Singapore but brought up in Canada. She also lived briefly in the United Kingdom. An academic with a PhD in Victorian literature and culture, she wrote MASCULINITY AND THE ENGLISH WORKING CLASS IN VICTORIAN AUTOBIOGRAPHY AND FICTION. She lives in Ontario, Canada. Visit her at her author's website www.yslee.com.

The Traitor in the Tunnel blog tour schedule: