I don't know about you, but I went through That Phase in my childhood when I glommed over all things Egypt. I devoured books on Tutankhamun; I wondered over (and was more than a little creeped out by) the mummification process. When I got the chance to go to Egypt in January to attend a college friend's wedding, I knew that I would do whatever it takes to make the wedding and then perhaps do a little more.

Fortunately for me, my friends and I decided to use the trip as a really unusual one-and-a-half-year college reunion. My four close girlfriends from the swim team and I made the wedding; three of us then went on afterwards for the Egypt tour that took us to see sights I never thought I'd actually get to see in person over the course of eleven days.

This wedding was a multi-day affair, yo! The majority of it took place in the "backyard" of the Sofitel Legend Old Cataract Hotel in Aswan. Aswan is the slow-paced city that the Nile floats dreamily by at the beginning of its journey through the rest of Egypt, and the Old Cataract is this UN-BE-LIEV-ABLE place that looks straight out of the set of an early twentieth century movie. The place exudes glamour--check out the "backyard": 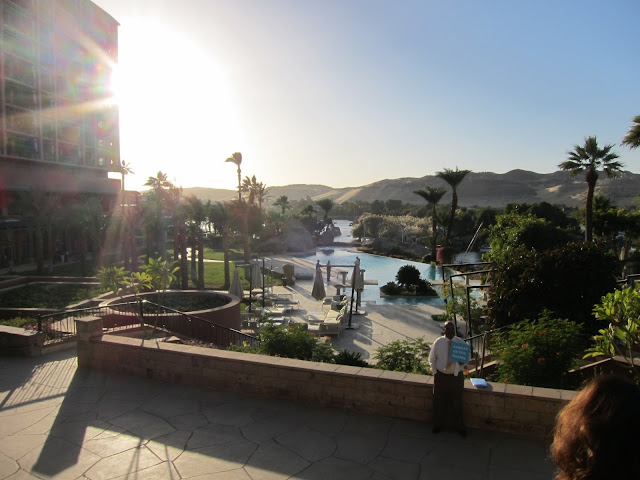 Can you imagine having your wedding in a place like this?!

As I said, the wedding was a multi-day affair. It consisted of a Nubian dinner/dance, a trip for all of us out to an island to see the Philae Temple, a cocktail party (with open bar), the wedding itself with a good 500 guests (with open bar and white flowers allegedly flown in from Alexandria), and an after-wedding farewell brunch. 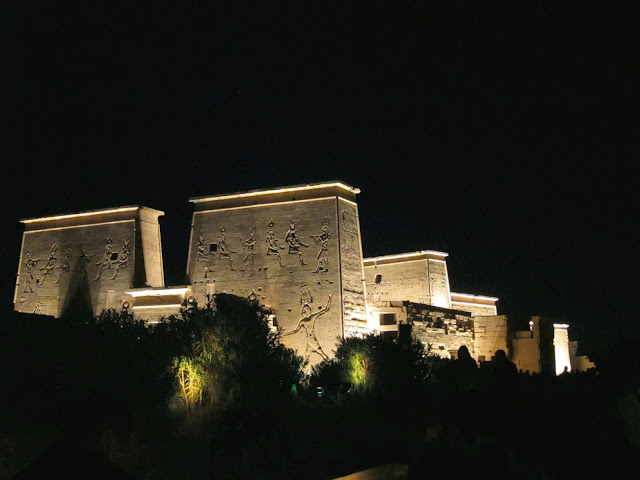 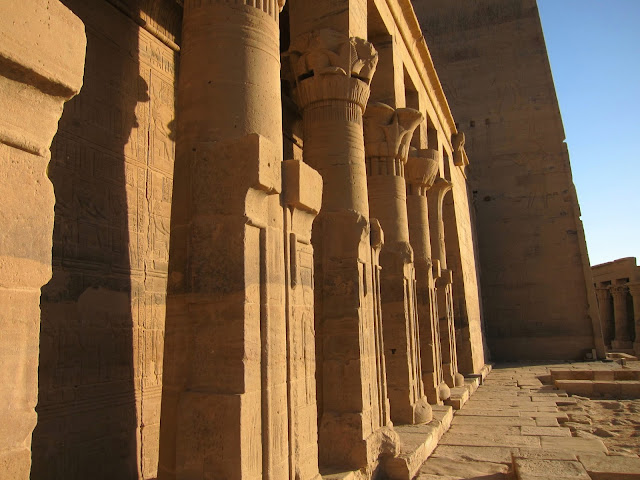 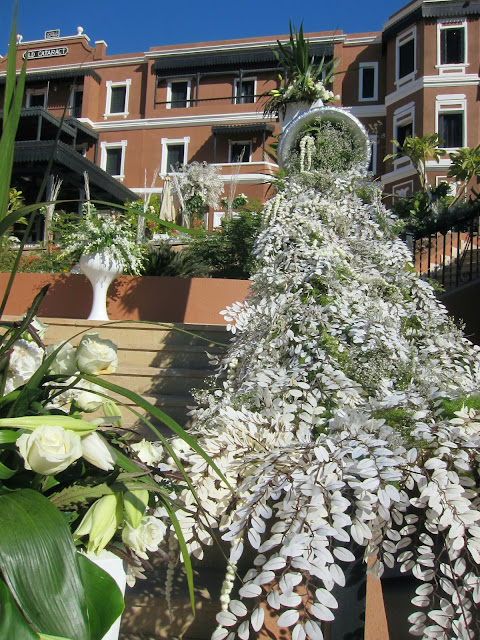 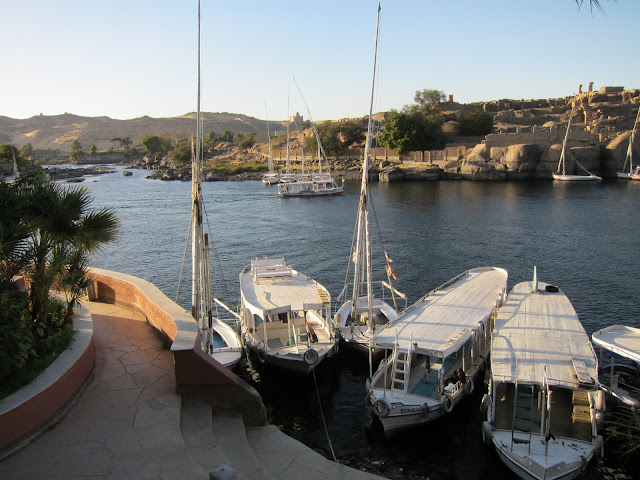 Oh, I forgot to mention that halfway through the wedding there was a 10-minute fireworks interlude set to the Pirates of the Caribbean theme song while spotlights played on the ruins across the river from the hotel. I don't know how all these things fit together but I'm going to mention it anyway, BECAUSE.

Our tour is under way! Woke up at the wee hour of 3am and made, under a star-studded desert sky, the three-hour drive to Abu Simbel, the site of that gigantic Ramses II temple that you've probably seen pictures of. (Ramses, he be an egotistical man, so we've learned.) 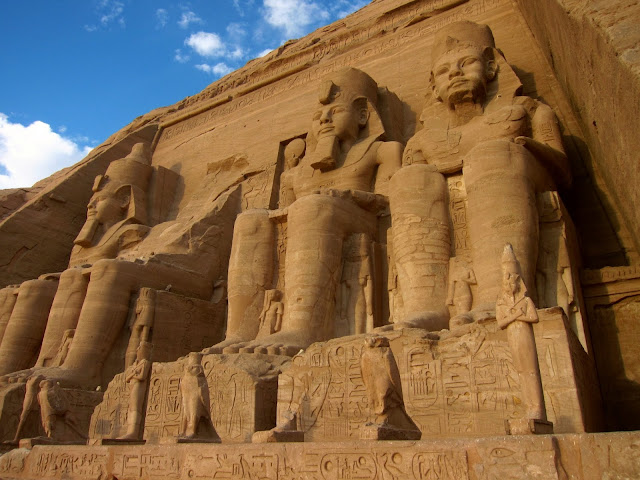 Then it was back to Aswan, where we said goodbye to two friends, and then the remaining three of us began our two-day, two-night "cruise" down the Nile aboard a felucca. I put "cruise" in quotes because a felucca is this: 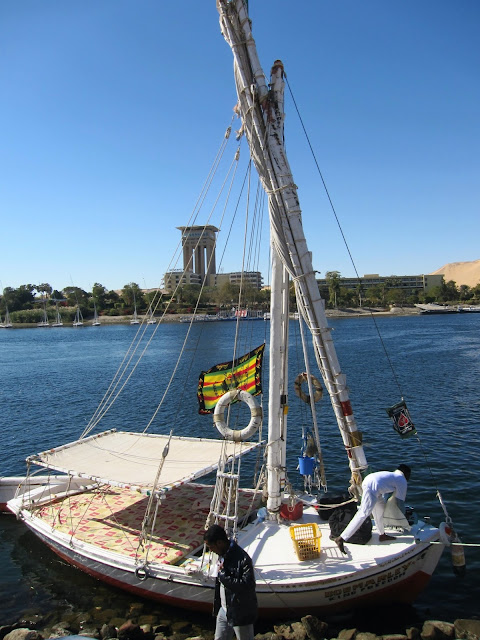 A canvas-sail boat, and that's a very comfy mattress placed across the whole of the deck area, because that, ladies and gentlemen, is where we sat and slept for the next 40 hours. There's not much to do on a felucca except to read, sleep, and relax, which is what we did: 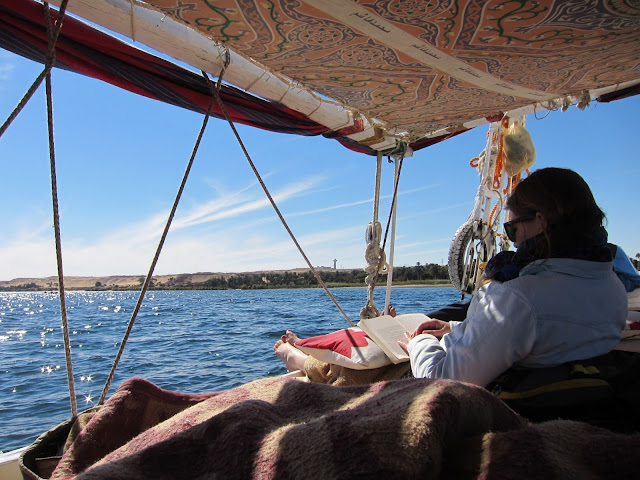 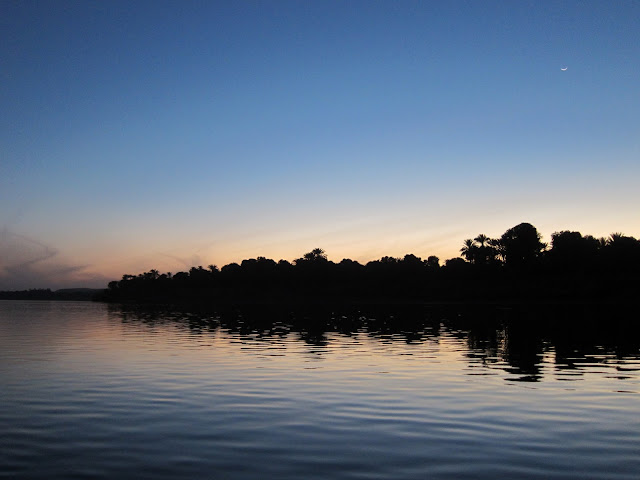 Temples, temples, and more temples! Today we saw lots. Of. Temples. It started with Kom Ombo (we were its first visitors of the day); went onto Edfu, the most well-preserved Greco-Roman style temple in the world; Karnak, a temple of gargantuan, imagination-inspiring proportions; and Luxor at dusk. 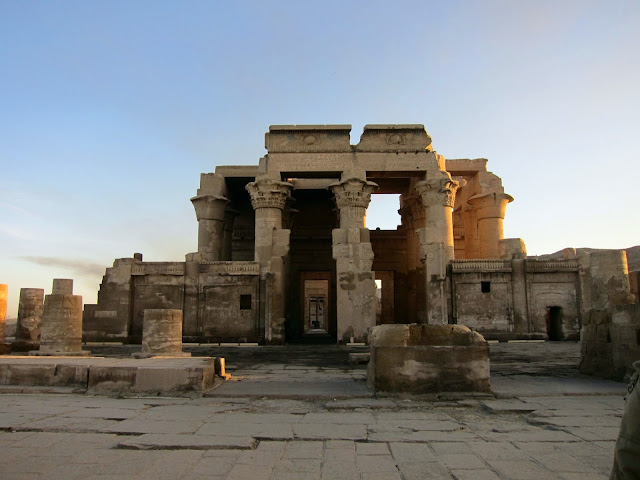 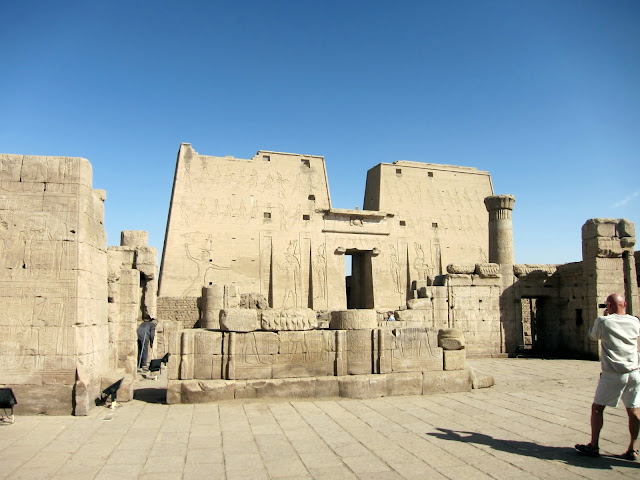 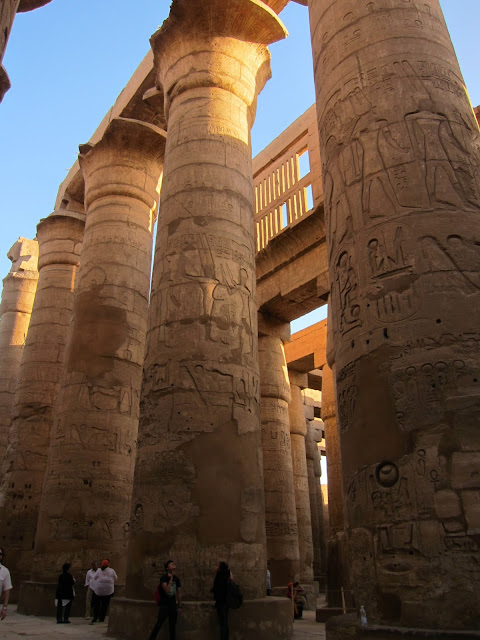 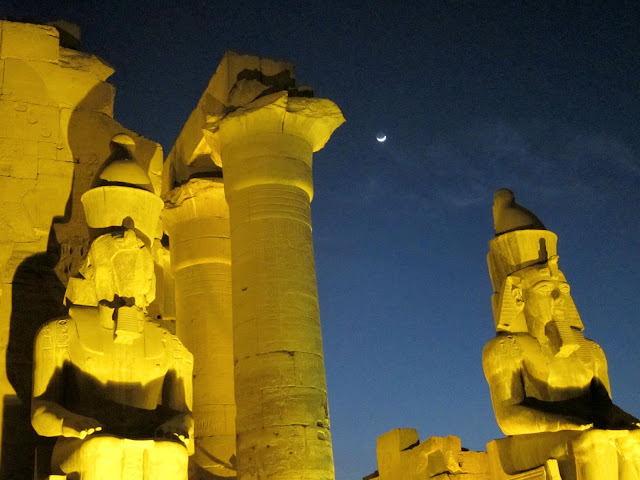 They're all stunning and beautiful in their own ways--my favorite was Karnak, because of how its incredible size reflects the unified vision (and egoism) of dozens of pharaohs--but visiting four temples in one day is certainly overwhelming! My friends and I kept on disappointing our tour guide by mixing the stories behind the temples up--"Wait, which one was built to worship a crocodile god again?"--but oh well.

(It's Kom Ombo, by the way. They worshipped the crocodile god there.)

Today we visited the West Bank of Luxor, the location of the famous Valley of the Kings, secret burial site for dozens of pharaohs. No one is allowed to bring cameras into the valley itself, so I'll just tell you about sloping tomb entrances painted with marvelous images of rituals and everyday life and gods and wars, and standing at the end of the tomb, staring at a huge sarcophagus carved from stone and imagining the place filled to the brim with mounds of treasures as befits a royal. Incredible. 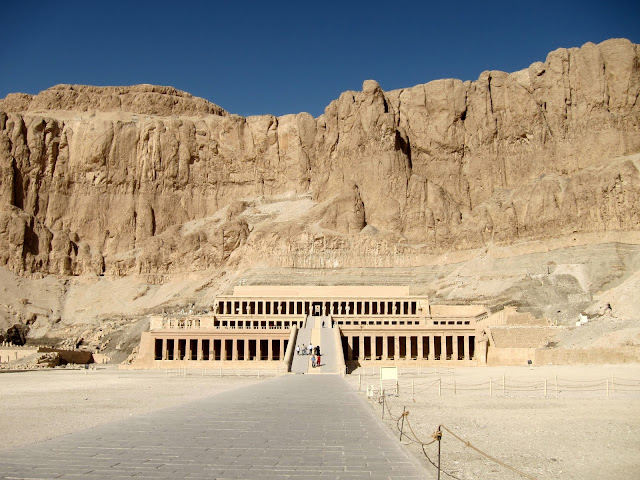 --and Medinat Habu, where the pharaoh Thutmosis III wanted his achievements to be permanent (at this time pharaohs and others used to go around graffitiing other pharaohs' monuments in order to try and "erase them from history") and so ordered all the carvings on this temple to be made extra deep. 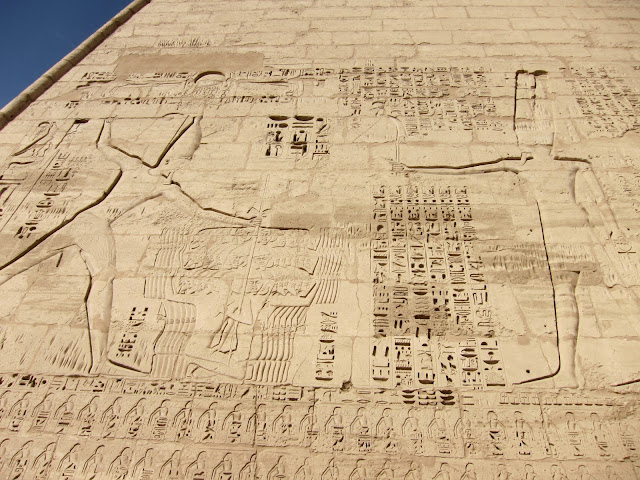 Later that night, we climbed aboard a sleeper train to continue our journey in Cairo. And that's where I'll stop for now!
Posted by Steph Su at 9:00 AM