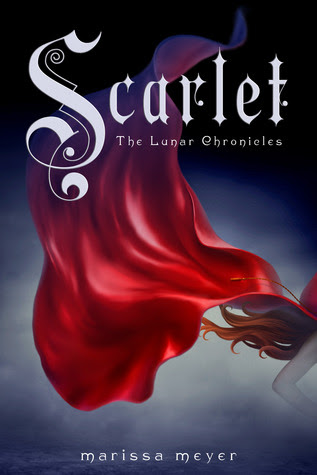 Scarlet Benoit’s grandmother has gone missing. Everyone tells her to not worry about it, there’s nothing she can do, her grandmother is an individualistic kind of person, but Scarlet thinks there’s something more insidious behind her grandmother’s disappearance. The only person who will help her is a soft-spoken street fighter named Wolf, whom Scarlet hopes she can trust, but who may have an agenda of his own. Answers are discovered, but more questions raised, when they cross paths with Cinder, whose recent and widely publicized escape from a New Beijing prison just might start the war that the ruthless Lunar Queen has been waiting for.

Cinder was my unexpected enjoyable find of last year. After experiencing how effortlessly Marissa Meyer can weave together a convoluted yet exciting tale, I had high demands for the sequel, SCARLET. And in a way, SCARLET fulfilled them. In a way, it didn’t.

The good first: everything we liked about Cinder is in here, except perhaps even a notch better. In particular, the characters, old and new, major and supporting, are easy to cheer on. I mean, there are exceptions. Kai’s role is reduced to that of beleaguered new and helpless emperor under international pressure. Wolf, I’m sorry to say, did not appeal to me so much, not because I didn’t like his soft and shy personality (I did) so much as I have known many misunderstood love interests with wounded hearts of gold (see: many adult romance male leads). But when you weigh the slightly annoying—Kai and Wolf—against the good—Cinder’s resourcefulness and empathic internal struggle, Scarlet’s ferocity at protecting her loved ones, Thorne’s much-appreciated airheaded charm lightening the mood)—the good comes out on top.

That being said, one of the issues that some reviewers noted as a weakness in Cinder is even more apparent in SCARLET, and that is the world-building. I remember thinking the world-building in Cinder was decent, but in SCARLET I found it lacking. Don’t get me wrong: Meyer does a Richelle Mead-worthy job of setting up an elaborate yet believable backstory to the world’s current state, the one involving the Lunars and Princess Selene. But settings-wise, inadequate research and/or thought was glaringly apparent. At no point did the scenes in France distinguish themselves from what could’ve been going on in any other place in a future Earth. I wanted the book to show me its vision of what a future Earth divided into regions like the Eastern Commonwealth and European Federation, and experiencing strained relationships with Lunar, would look, feel, hear, taste, and smell like. What distinguishes Rieux, Scarlet’s hometown, from other places in the world? How does Paris fare several centuries from now, and how does its altered cityscape affect the characters’ movements and experiences?

Still, SCARLET was fast-paced and exciting. My attention started wavering around the end when everyone was running around killing each other in a very blankly drawn future Paris, but I’m still curious enough about how the Lunar/Princess Selene conflict will play out that I think I’ll continue to hang around this series. Read at the surface level, SCARLET is a successful rollicking good read. But I hope the series will pick up a bit on its world-building, for fear that those cracks will end up pulling the books down.

Cover discussion: Oh hey, look, a publisher that didn't feel compelled to arbitrarily change the cover from hardcover to paperback. Hooray! I do like how this cover matches the one for Cinder, which I felt was memorable and powerful in its simplicity.

Personal copy.
Posted by Steph Su at 7:30 AM