Review: Bass Ackwards and Belly Up by Liz Craft and Sarah Fain 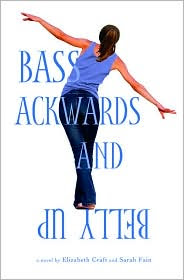 Bass Ackwards and Belly Up by Liz Craft and Sarah Fain
Often described as Sisterhood of the Traveling Pants for older readers, Bass Ackwards and Belly Up is a sweet debut novel that tracks an unexpected season in four friends' lives. Sophie, Kate, Becca, and Harper are all supposed to go to college... but at the last minute Harper tells them that she's staying home to go for her dream: writing the next Great American Novel. In actuality she's been rejected from the only school she applied to, but she conveniently doesn't tell her friends that.
Harper's announcement starts a rebellion shocking in the girls' comfortable suburban neighborhood: Kate and Sophie decide not to go to college either. Sophie's going to LA to pursue her dream of being an actor, and Kate decides to travel around Europe in search of something she can be passionate about, something different from her life full of plans. Becca's the only one of the four still going to college at Middlebury, so her friends give her an assignment in addition to being a skiing star: she has to fall in love.
In LA, Sophie has an up-and-down something going on with Sam, pool boy for the family she's staying with. She also gets together with a famous actor. Kate travels around Europe trying to accomplish the list of 100 things her friends have given her to do. Harper procrastinates on writing her novel and feels an attraction between her and Mr. Finelli, her hot and young former AP English teacher. And Becca deals with an unfair Middlebury coach and her disgust for football star Stuart Pendergrass... who happens to like her. A lot.
How will their romantic relationships turn out? Will their dreams come true? Bass Ackwards and Belly Up starts out slow, but it's well worth the first 50 pages of non-action. Don't miss the sequel, Footfree and Fancyloose!
Rating: 4.5/5
Posted by Steph Su at 12:06 AM