If You Have ADD, Want to Laugh, Like Making Lists... Fun Stuff in YA

Twitter is an amazing tool for spreading interesting/funny/memorable things that you find, but sometimes a blog post can help do that too. This post is mostly for if you're looking for laughs, giggles, and smiles.

First off, check out the cool photo-essay that was on Publishers Weekly featuring book-publishing industry people's book-inspired Halloween costumes. Of those who saw it with me last night on Twitter, the most votes goes to the group recreation of the Hush, Hush cover, but I'm pretty impressed by the guy dressed up as Edward Cullen. Not many people can pull off the pale and brooding look as well as he does in that picture! Now why didn't I have ideas like these, or know people who'd be up for ideas like these, for Halloween last weekend?

Next, my lovely blogger friend Khy (from Frenetic Reader) made me laugh endlessly she started quoting lines from the Twilight movie at me. She then showed me some great Twilight-inspired pictures: 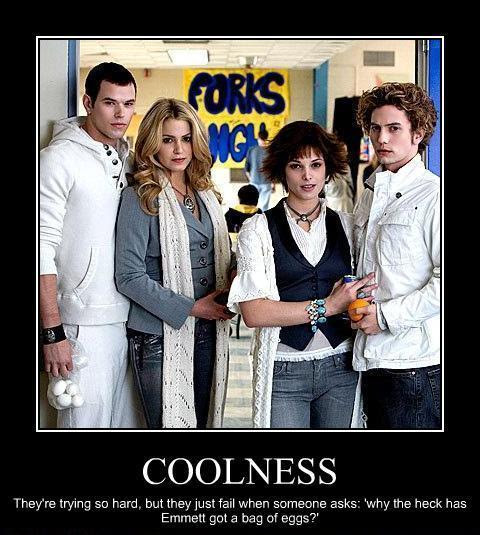 (I hope you can click on it to enlarge it.) I thought that one was pretty funny--and then she showed me this:

(Again, click on it to get the full impact.)

Oh, Mean Girls. You will be forever a classic in must-watch movie history. Also, now you know that you can make me bust out into laughter by saying, "Say it...OUT LOUD" to me. Oh, gosh, I am so mature.

If you're like me and really like making lists for your personal enjoyment, then you should definitely check out this cool new site called 5ft Shelf. Basically, you get five feet of virtual space on which to put your absolute essential best books, movies, and music albums. Create your own shelf, see what others have on their shelves, and see what the most popular items are. Not only is it individually fun, it's also an interesting way to see what people consider the "essentials" of modern media. And yeah, I think I'll go and put Mean Girls on the "movies" part of my shelf...

And then my lovely author friend Becca Fitzpatrick (Hush, Hush) had awesome news to share! Remember the beautiful cover of Hush, Hush, which is hands-down one of the best covers ever made? Well, she got to take a sneak peak at an early comp (that's like a rough-draft sketch) of Crescendo's cover (that's the sequel, coming out in Fall 2010) and apparently it is even better than the cover of Hush, Hush. I can hardly believe it. I mean, can you even imagine that? I'm not an artistic thinker, so I'm just going to sit here and die a little as I impatiently wait for the release of the cover and, eventually, Crescendo itself.

Oh, and finally! I've been wanting to be a part of a book blogger Secret Santa-like thing since July, when winter was just an idea and not a looming reality. Now there is not one, but TWO opportunities for a blogger gift exchange! Kate at The Neverending Shelf is hosting a Secret Santa (get to it by following this link), which I'm definitely excited to participate in, and there's a Book Bloggers Holiday Swap that's not just limited to books that you can find here. But hurry! Signups for Kate's Secret Santa ends November 15, and the last day to join the Holiday Swap is November 12. This is international, so it can be a really cool way to receive some wonderful and surprising things for the holiday season. :)

Hope you guys check out and enjoy the links, news, and pictures!
Posted by Steph Su at 10:00 AM