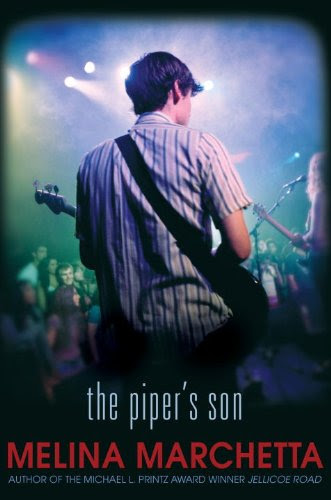 The Piper's Son by Melina Marchetta

Award-winning author Melina Marchetta reopens the story of the group of friends from her acclaimed novel Saving Francesca - but five years have passed, and now it’s Thomas Mackee who needs saving. After his favorite uncle was blown to bits on his way to work in a foreign city, Tom watched his family implode. He quit school and turned his back on his music and everyone that mattered, including the girl he can’t forget. Shooting for oblivion, he’s hit rock bottom, forced to live with his single, pregnant aunt, work at the Union pub with his former friends, and reckon with his grieving, alcoholic father. Tom’s in no shape to mend what’s broken. But what if no one else is either?

An unflinching look at family, forgiveness, and the fierce inner workings of love and friendship, The Piper’s Son redefines what it means to go home again. [summary from Goodreads]

The upcoming US edition of The Piper's Son (already out in Australia) now has a cover...and my my my, do I like it! Is that you on the cover, Thomas Mackee? Mind turning around so I can, er, have a face-to-face conversation with you? *cough*

In all seriousness, though, Melina Marchetta is one of my favorite authors, and there is no way she will disappoint me with this book. No way. I'm looking forward to slightly revisiting all of my beloved characters from Saving Francesca, as well as learning more about Thomas Mackee, that endearingly sullen, wannabe-rebellious musician.

The Piper's Son will be released in hardcover from Candlewick on March 8, 2011.
Posted by Steph Su at 8:00 PM