I'm excited to be part of an exclusive blog tour put together by Simon & Schuster and revealing excerpts of FINALE, the conclusion to the Hush, Hush series by Becca Fitzpatrick. Finale is the fourth and final book in the Hush, Hush series and will be released on October 23, 2012. Read on for an excerpt of this embargoed book. :)

“When do I get to see these dance moves of yours?” he asked. “We’ve never gone dancing at the Devil’s Handbag together.”

“You aren’t missing much. I was told tonight I’m definite fish-out-of-water material on the dance floor.”

“Vee needs to be nicer to you,” he murmured, pressing a kiss to my ear.

“Vee doesn’t get credit for that line. That would go to Dante Matterazzi,” I confessed absentmindedly, Patch’s kisses lulling me into a happy place that didn’t require a lot of reasoning or forethought.

“Dante?” Patch repeated, something unpleasant creeping into his tone.

“Did I forget to mention Dante was there?” I asked. Patch had also met Dante for the first time this morning, and for most of the tense meeting, I feared one would drag the other into a fistfight. Needless to say, it wasn’t love at first sight. Patch didn’t like Dante acting like he was my political adviser and pressuring me into war with fallen angels, and Dante . . . well, Dante hated fallen angels on principle.

Patch’s eyes cooled. “What did he want?”

“Ah, now I remember what I wanted to talk to you about.” I cracked my knuckles. “Dante’s trying to sell me to the Nephilim race. I’m their leader now. Trouble is, they don’t trust me. They don’t know me. And Dante’s made it his mission to change that.”

“Tell me something I don’t know.”

“Dante thinks it might be a good idea for me to, ah, date him. Don’t worry!” I rushed on. “It’s all for show. Got to keep the Nephilim thinking their leader is invested. We’re going to squash these rumors that I’m dating a fallen angel. Nothing says solidarity like hooking up with one of your own, you know? It makes for good press. They might even call us Norante. Or Danta. Do you like the sound of that?” I asked, trying to keep the mood light.

Patch’s mouth turned grim. “Actually, I don’t like the sound of that.”

“If it’s any consolation, I can’t stand Dante. Don’t sweat this.”

“My girlfriend wants to date another guy, no sweat.”

“It’s for appearances. Look on the bright side—”

Patch laughed, but the humor was lacking. “There’s a bright side?”

“It’s only through Cheshvan. Hank got Nephilim everywhere all worked up over this one moment. He promised them salvation, and they still think they’re going to get it. When Cheshvan comes, and ends up being like any other Cheshvan on record, they’ll realize it was a crapshoot, and little by little, things will go back to normal. In the meantime, while tempers are running hot and the hopes and dreams of Nephilim are hanging on the false belief that I can free them from fallen angels, we have to keep them happy.”

“Has it occurred to you that the Nephilim might blame you when their salvation doesn’t come? Hank made a lot of promises, and when they aren’t fulfilled, no one’s going to point fingers at him. You’re their leader now. You’re the face on this campaign, Angel,” he said solemnly.

I stared at the ceiling. Yes, I’d thought of it. More times today than I wanted to sanely contemplate.

One forever night ago, the archangels had made me the deal of a lifetime. They’d promised to give me the power to kill Hank—if I quashed the Nephilim rebellion. At first, I hadn’t planned on taking the deal, but Hank had forced my hand. He’d tried to burn Patch’s feather and send him to hell. So I shot him.


Follow the rest of the blog tour this week for more sneak previews into Finale! 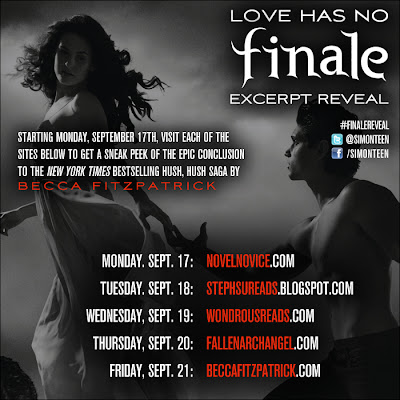