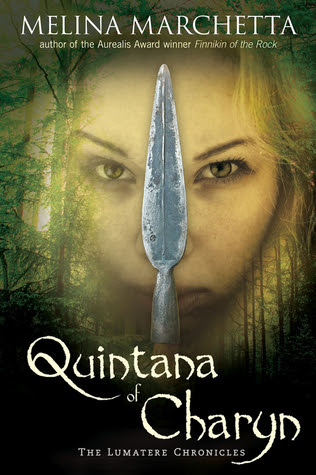 Princess Quintana, carrying the child that prophecy predicts will be the one to break Charyn’s 18-year curse of barrenness, is in hiding. Numerous groups are trying to seek her out, whether it’s to kill her or take her unborn child in the power struggle for Charyn’s throne. But no one is looking for her more desperately than Froi, father of Quintana’s child, and whose recent discoveries about his own family history make him more confused than ever about his loyalties toward Lumatere, Charyn, and Quintana.

How do you follow up perfection? It’s usually impossible—but this is Melina Marchetta we’re talking about, and she can do anything she wants to when it comes to writing. Still, when she actually managed to write a second book in a trilogy that was so astoundingly amazing, it was going to be a hard one to follow up for sure. While QUINTANA OF CHARYN didn’t do it for me as Froi of the Exiles did, it was still an overall satisfying ending to one of the most emotionally draining and ambitious YA fantasy series in recent publishing history.

QUINTANA OF CHARYN made me think for the first time in this series of why I like these characters when most of them can be so horrible, to themselves and to one another. Because in this installment, I think I was removed enough from their situations to be appalled at how they talked to and treated one another. If they were real, they’d be given restraining orders. We’d think they are off their rockers. We’d hiss in their faces about how they should be ashamed of themselves, about how saying you’d be willing to destroy yourself and others out of your love for her is more scary than romantic. Marchetta’s characters often seem like they’re acting out a dangerous dramatization of romance, one that borders on mentally abusive.

So how come Marchetta gets away with writing arguably abusive characters that we (hopefully) intelligent readers support fiercely, when we’re the ones who skewer portrayals of abusive characters as love interests in YA fiction? I don’t know. I’ve been turning this over and over in my head ever since I finished reading, and I still haven’t figured out why I’m okay with loving Froi, Quintana, Lucian, Isaboe, and the others, when in any other circumstance I would’ve condemned the sympathetic portrayal of such characters. Is it because I sympathize with their horrifying childhoods and feel that their experiences explain the way they interact with one another? (But the children of abusive upbringings can grow up to be positive role models.) Is it because they are good with no one except the few that they love with all their broken hearts? Possibly. Quite possibly that.

Reading what I’ve written, this probably doesn’t qualify as an actual review, more like my musings on my confusion over my feelings for the book. Stylistically and emotionally, QUINTANA was a lot like Froi of the Exiles for me: in the beginning I was frustrated with how unlikable so many of the characters were, and in the last hundred pages I was tearing up at every sentence on the page. While it didn’t have that Punch for me as Froi did, it’s still Melina Marchetta. It’s still the Lumatere Chronicles. It is so worth reading and falling for.

Cover discussion: I like the Australian cover a lot more than the US one. This is a pretty, calm, bashful model pretending to have the eerily raw fierceness that Quintana possesses. It's Quintana's strength that makes her alluring, not her outward appearances. And the Australian cover gets that.

e-galley received from publisher and NetGalley for review.
Posted by Steph Su at 6:00 AM