You may have heard of Zhangjiajie. Or, at the very least, you may have seen pictures of someplace that looks sort of like this: 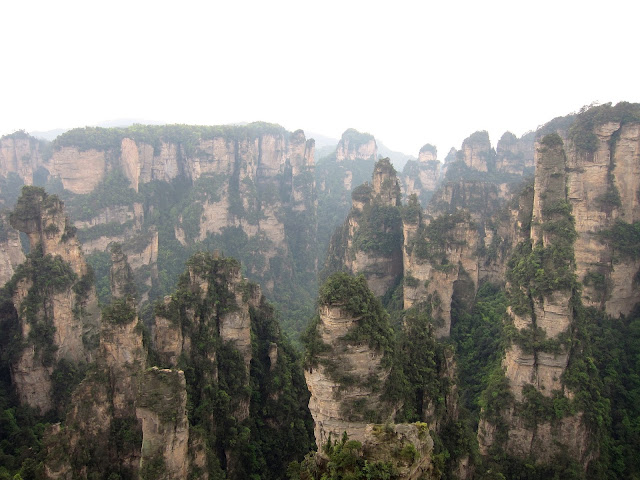 That's because Zhangjiajie is often considered the inspiration for the alien world in the movie Avatar. Visually it's an impressive sight. Spatially it is overwhelming, as Zhangjiajie, as it is best known, is actually a group of park areas collectively called the Wulingyuan Scenic Area, and consists of the four major areas Zhangjiajie National Forest Park, Suoxiyu Natural Resource Preserve, Yuanjiajie Scenic Area, and Tianzishan Mountain Natural Resource Preserve--which are then each further divided into smaller sections. Are ya confused yet?!?

Well, I certainly was when I first tackled this giant beast of a park. However, a helpful map or two at your side while reading about how to conquer the park makes things a bit more manageable.

There are many options for getting to the Zhangjiajie area. Zhangjiajie city has a train station, a bus station (with buses nearly once or twice an hour going to and from Changsha, the nearest giant city in Hunan Province, about a 4-5 hour ride away), and an airport with flights from most major cities in China. However, from Zhangjiajie city to the actual park area itself--and the entrances to the park area--is another 40 minutes by minibus, which can be caught leaving from the city car station (right next door to the train station) regularly and costs 10-12RMB. The two main park entrances that people use are the Zhangjiajie Forest Park entrance (森林公园门口) and the Wulingyuan entrance (武陵园门口).

That means that you have four main "regional" choices for accommodation when visiting: Zhangjiajie City, which is that 40-minute minibus ride away; the sizeable town of Wulingyuan, outside the Wulingyuan entrance; the tiny Zhangjiajie Village outside the Forest Park entrance; and a smattering of hostels of questionable quality within the actual park itself.

A fair number of people choose to stay in Zhangjiajie City, traveling the distance to and from the park cheaply, and thus have the convenience of all a decent-sized city offers. Your accommodation choices in Zhangjiajie City range from backpacker hostels to 5-star international hotels. (But a note on 5-star hotels in not-eastern China: they won't be at the 5-star quality of international standards. They'll be fine, but the gilding will cover the chipping paint.) I myself stayed at the Zhongtian International Youth Hostel in Wulingyuan, a 10-minute bus ride away from the park entrance, with everything you could want nearby: cities, supermarkets, wet markets, souvenirs, even a kitschy bar street.

A peak season park ticket costs 245RMB, but the high cost is balanced by the fact that it is valid for three days. You can bet the boy and I made the most of that! On the first day, we went to Yaozizhai, a less touristed area of the park that offered equally great views. The day was HOT--30 degrees Celsius--which made the climb all that much more brutal, because we're talking just stairs, stairs all the way stairs. We chilled at the top of a natural bridge--we were able to walk on top of it--to this kind of scenery: 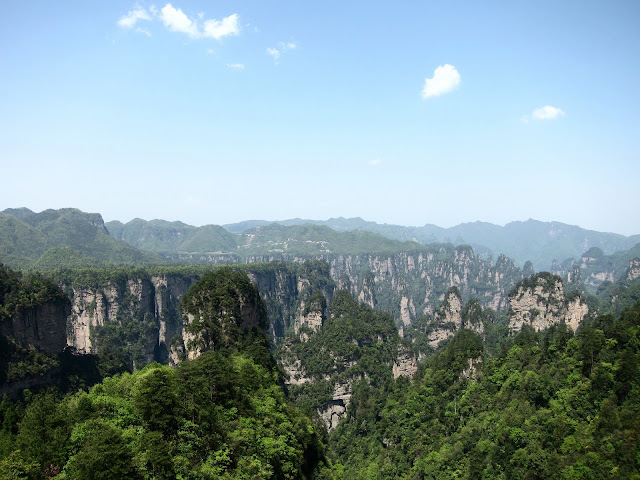 Here is me chilling against the natural bridge, the size of which you cannot see, but was quite lovely: 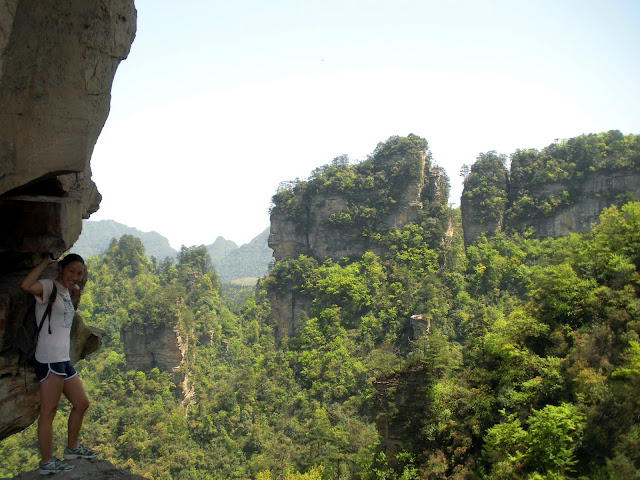 Despite the ominous promise of huge crowds by the presence of the cable car, the multi-kilometer loop at the top of Huangshizhai, which took us over an hour to leisurely circle, was surprisingly uncongested. That meant we had relative peace while gazing at some of what was, in my opinion, the most iconic scenery in the park: 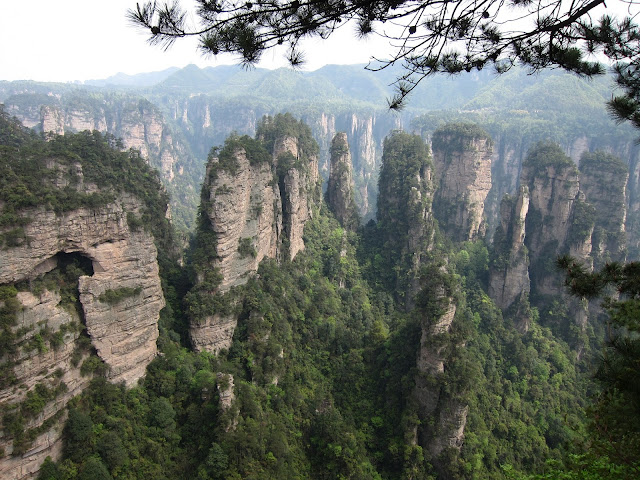 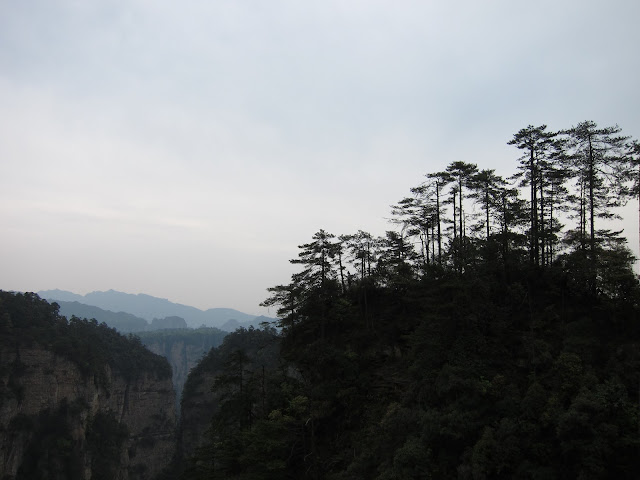 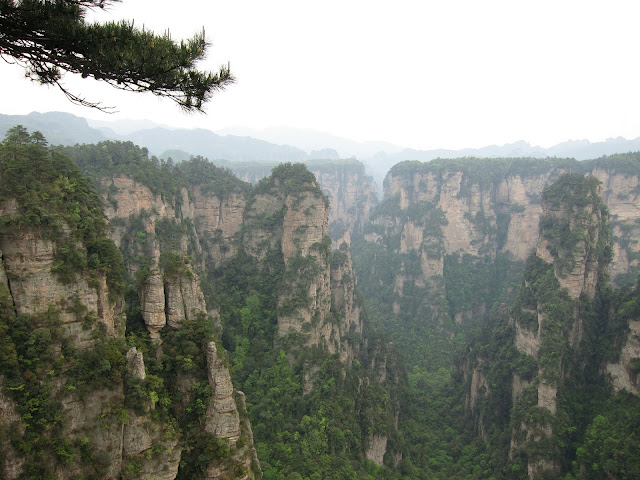 We had ambitious plans for our day, but climbing up and down stairs took a lot more time and energy than we had expected, so after descending from Huangshizhai, we walked along the Golden Whip Stream (金鞭溪), in the shadow of formidable canyon-like rock formations: 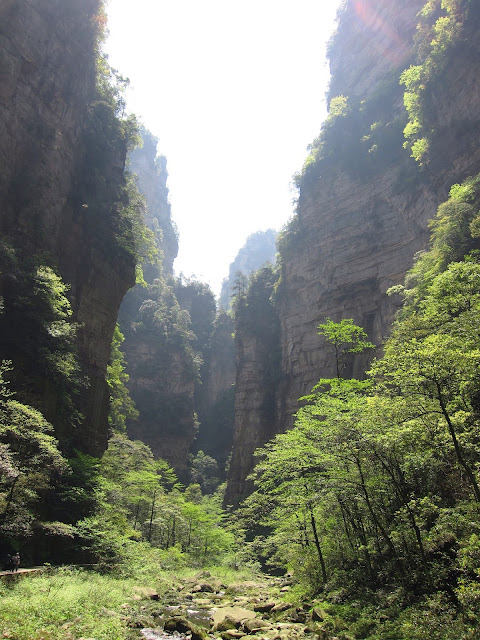 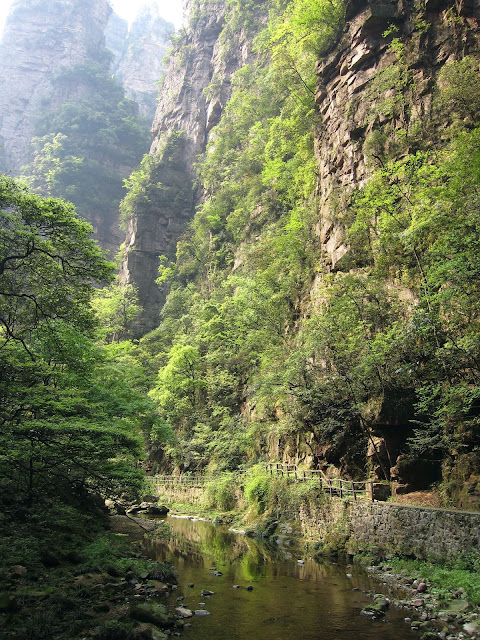 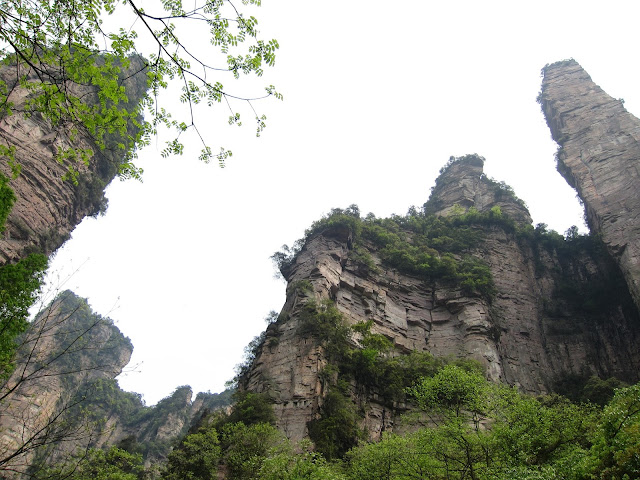 For Day Three, our destination was Yuanjiajie--specifically, a less developed scenic area within Yuanjiajie called Laowuchang. Today we wanted to save some time by taking elevators and cable cars. As it turns out, the Bailong Elevator, which we took to get up to Yuanjiajie, was mobbed by Chinese tourist groups. And let's just say that the Chinese are not known for their ability to queue. Furthermore, the elevator, which could've provided some nice photo opportunities, was a thing of pure function: I was crammed into the narrow and unaesthetically-pleasing elevator, shot up 300-something meters, and spat out with old Chinese men at my heels. It was truly hard to decide whether or not the time we saved would've been better spent getting away from the tour guides with their clip-on megaphones. 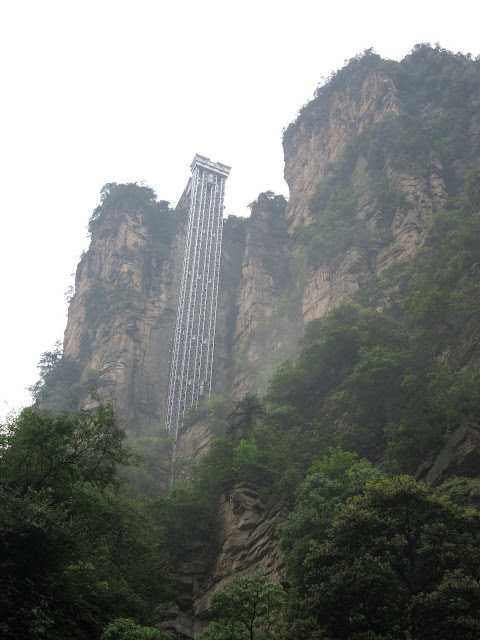 Then we had the most difficult time trying to actually get to Laowuchang. After getting caught up in the tide of tourists at the head of Yuanjiajie (where I took the picture that is at the beginning of this blog post), we got onto a free mini-shuttlebus taking people to the Tianzishan park area. Only, as we found out, the shuttlebuses don't actually stop anywhere along the way, and we had no idea when to get off. 45 minutes later, we were at the other end of the park, but not where we wanted to go. So we rode with the driver back the way we came, asking him to drop us off at the place where we needed to go. Turns out, the driver forgot to stop for us! It wasn't until we were almost back at Yuanjiajie that he flagged down his driver friend who was going in the other direction and asked him to drop us off at the Laowuchang entrance. It's one of those stories that is amusing in future tellings, but not when it was happening.

Well, the rest of the day was more of that. After wandering around half-lost on unpeopled dirt roads, we finally came across the sight I had wanted to come to Laowuchang to see--Fields in the Sky: 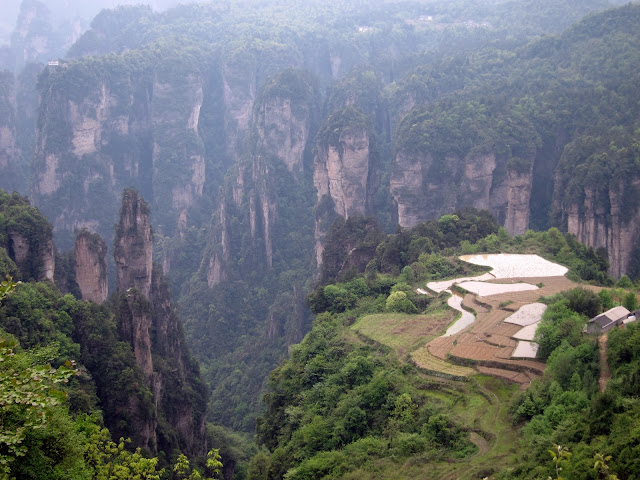 Rice fields at the edge of the cliff against a backdrop of karst formations! Amazingggg. Mind blown. I could've stayed there all afternoon, soaking in the sight, taking pictures.

And perhaps we should just stayed there, then turned back, for the next part of our adventure was...adventurous. Not far after Fields in the Sky, the dirt road sputtered to an end at a huddle of crude metal shacks. Huh? Where did the path go? Where is the way to Celestial Bridge, supposedly the next sight on the route?

In the end, we had to hire a cheerful local lady to be our guide to Celestial Bridge. She said that the path was hard for non-locals to find, and washed out in places, and would take about two hours. Well, it did take two hours--two hours of walking along a path that looked like it sees no people except for the rare wannabe-adventurous tourists who were tricked by maps into believing there was actually a path between the two sights. We wound in and out of fingers of mountain ridges, I lost count of how many, often with only a thin line of vegetation separating us from the edge. Again, one of those stories that's good for the telling afterwards, but a lot worrying when it was actually happening!

Since I told you all that, I suppose that I am practically required to show you a picture of Celestial Bridge now: 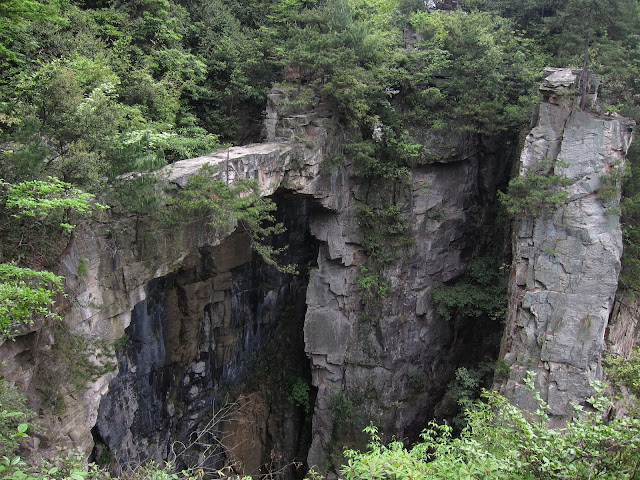 It's an incredibly narrow bridge of rock, thousands of feet above the ground. It was unconvincingly gated off, so I had wanted to climb through and stand on it, with nothing but air for thousands of feet below me--but I decided not to put my life in the hands of two legs extremely shaky after walking for two hours through uneven brush.

So yes, our third day was a great adventure! What a way to end our trip. The next morning we took the bus back into Zhangjiajie City and caught the 17-hour sleeper train back to Shanghai. Here's a final picture of Zhangjiajie to send you on your way until my next travel post. Bye! 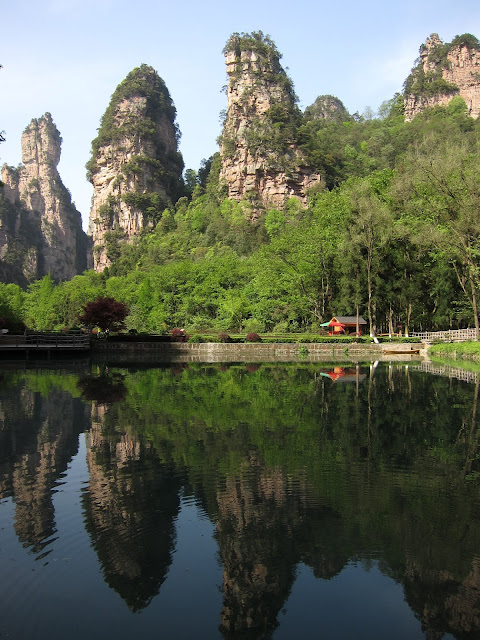 I got a lot of the info I needed for my trip to Zhangjiajie here.
Posted by Steph Su at 10:13 AM