As always, In My Mailbox was inspired by Alea and is now hosted by Kristi, who won a BBAW award for this meme! Check out Kristi's blog to see what others got in their mailboxes this week.
It only looks like I got a lot this week because I'm home for the weekend and was welcomed back by a lovely pile of books on my desk!!
For review:

My Invented Life by Lauren Bjorkman
(Henry Holt & Co. / Sept. 29, 2009)
With Roz and Eva everything becomes a contest—who can snag the best role in the school play, have the cutest boyfriend, pull off the craziest prank. Still, they’re as close as sisters can be. Until Eva deletes Roz from her life like so much junk e-mail for no reason that Roz understands. Now Eva hangs out with the annoyingly petite cheerleaders, and Roz fantasizes about slipping bovine growth hormone into their Gatorade.
Roz has a suspicion about Eva. In turn, Eva taunts Roz with a dare, which leads to an act of total insanity. Drama geeks clamor for attention, Shakespearean insults fly, and Roz steals the show in Lauren Bjorkman’s hilarious debut novel.
Funny, a debut novel, and a GLBTQ book? I'm all over this one! Thank you, Lauren, for offering me a copy! 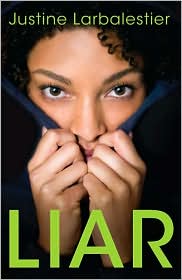 Liar by Justine Larbalestier
(Bloomsbury / Sept. 29, 2009)
Micah will freely admit that she’s a compulsive liar, but that may be the one honest thing she’ll ever tell you. Over the years she’s duped her classmates, her teachers, and even her parents, and she’s always managed to stay one step ahead of her lies. That is, until her boyfriend dies under brutal circumstances and her dishonesty begins to catch up with her. But is it possible to tell the truth when lying comes as naturally as breathing? Taking readers deep into the psyche of a young woman who will say just about anything to convince them—and herself—that she’s finally come clean, Liar is a bone-chilling thriller that will have readers see-sawing between truths and lies right up to the end. Honestly.
Most of you already know my thoughts about the cover already, but actually seeing the finished copy still makes me smile. It IS a very pretty book, and I guarantee it will attract readers on the shelves. Very excited to read this! 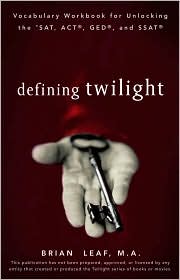 Defining Twilight by Brian Leaf
(Wiley, John & Sons / July 27, 2009)
Can you resist the allure of Edward’s myriad charms—his ocher eyes and tousled hair, the cadence of his speech, his chiseled alabaster skin, and his gratuitous charm? Will you hunt surreptitiously and tolerate the ceaseless deluge in Forks to evade the sun and uphold the facade? Join Edward and Bella as you learn more than 600 vocabulary words to improve your score on the *SAT, ACT®, GED®, and SSAT® exams!
I'm interested to see how the author uses Twilight for his purpose. Thank you, Brian!
Won:
I Was a Non-Blonde Cheerleader by Kieran Scott
A Non-Blonde Cheerleader in Love by Kieran Scott
Brunettes Strike Back by Kieran Scott
Geek Magnet by Kieran Scott
Sudoku Pocket Puzzles 2
These came as prizes from Royal Reads.
I am a Genius of Unspeakable Evil and I Want to Be Your Class President by Josh Lieb (Razorbill / Oct. 15, 2009) - From a contest on Hope's blog!
Breathing by Cheryl Renee Herbsman
The Demon's Lexicon by Sarah Rees Brennan
Won from a contest from Cheryl herself! I'm very excited to own these two books!
Bought:
The Whipping Boy by Sid Fleischman
Fever 1793 by Laurie Halse Anderson
The Brief Wondrous Life of Oscar Wao by Junot Diaz
Wintergirls by Laurie Halse Anderson
I bought some books I've really wanted at the Book Barn this weekend. I'm catching up on my Newbery Medal winners, as inspired by the children's lit class that I'm taking; Fever 1793 is a book for that class; Oscar Wao has been on my wishlist since I heard that the author came to my school (only I didn't know it and missed him!), and then I read his short story collection, Drown, for my fiction workshop a few weeks ago; and a finished copy of Wintergirls!
Swapped:
Pagan's Crusade by Catherine Jinks
Bloody Jack by L. A. Meyer
The Betrayal of Natalie Hargrove by Lauren Kate - Thanks, Beth!
Darkfever by Karen Marie Moning
Hold Still by Nina LaCour
Sovay by Celia Rees
The Darcys and the Bingleys by Marsha Altman
Winter Rose by Patricia A. McKillip
Among the Brave by Margaret Peterson Haddix
Tap & Gown (Ivy League, Book 4) by Diana Peterfreund
Skinned by Robin Wasserman
Follow the Blue by Brigid Lowry
Night World No. 3 by L. J. Smith
Wildwood Dancing by Juliet Marillier
Endymion Spring by Matthew Skelton
Borrowed from library:
Another Faust by Daniel and Dina Nayeri
Devil's Kiss by Sarwat Chadda
The Splendor Falls by Rosemary Clement-Moore
So I'm plenty happy, if not a little overwhelmed--when am I going to have time to read all these fantastic books on top of my schoolwork?!
Posted by Steph Su at 7:00 AM