Review: How to Say Goodbye in Robot by Natalie Standiford 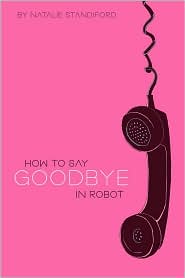 High school senior Beatric Szabo has never really been normal. Her family has moved around so often that she’s never had actual friends, and her own mother often calls her a “Robot Girl.” Then, in Baltimore, she strikes up an odd friendship with Jonah Tate, a quiet, friendless guy in her class who has the unfortunate nickname of “Ghost Boy.” Bea and Jonah strike up an intense friendship, to everyone’s shock. Bea learns about learns about Jonah’s past, and certain events that made him who he is today, but even she cannot comprehend him sometimes, or predict what he had been planning to do for a long time…

This first standalone book by the author of the Dating Game series is odd, but definitely heart-wrenching. With a cast of unusual and quirky characters, it’ll bring out the subconscious desire in all of us to explore all of our eccentricities.

Bea is a wonderful narrator, caught in between troubles at home, the cookie-cutter Barbie girls at school who try to draw her into their folds, and Jonah. She considers herself inhuman, lacking in human emotions—that’s why she calls herself “Robot Girl”—and yet we’re able to empathize with her and still root for her. Jonah may seem like your average high school misfit, the one no one wants to talk to because he’s that antisocial, but somehow we still care about him and want to help him be happier. Standiford creates characters that are flawed but still sympathetic, which never ceases to be an incredible accomplishment.

However, I had some difficulty believing in Bea and Jonah’s relationship. It seemed to me to start really quickly and suddenly transform into an inexplicably intense and life-transforming friendship. Pray, where was the development of the relationship? Why are Bea’s feelings for Jonah so strong when he constantly treats her cruelly? I liked Bea and Jonah at separate characters, but I was never able to figure out how they were supposed to work as a platonic “couple.”

Nevertheless, HOW TO SAY GOODBYE IN ROBOT is a read that will stay with you because of its defiance of conventions in YA lit. It’s not your typical romance, it doesn’t have your usual kinds of characters, and it certainly does not have an ideal ending. And yet it all works. HOW TO SAY GOODBYE IN ROBOT will leave you with your heart clenched and fists pressed against your eyes to prevent the tears from coming out. It is truly original and poignant in all its weirdness.


Cover discussion: 3 out of 5 - All that pink doesn't really appeal to me, but I saw a finished copy, with a much more muted, matte pink, and it doesn't look that bad! It'll attract the attention of girls, for sure, but I'm afraid a small portion of its ideal audience will miss it for the excessive girliness.

Thank you, Scholastic, for sending me a copy for review!
Posted by Steph Su at 12:00 PM

Email ThisBlogThis!Share to TwitterShare to FacebookShare to Pinterest
Labels: 3.5, natalie standiford, review, YA