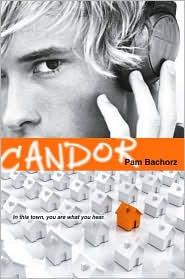 Tags: YA, sci-fi, brainwashing, thriller, dystopian, rebellion
Rating: 3.5 out of 5
Summary
After the death of his oldest soon, Oscar Banks’ father creates the “perfect” community, one where teens are brainwashed with subliminal messages into perfect complaisance, model citizens. But his father doesn’t know that Oscar’s been running his own business of helping endowed teenagers escape Candor before it’s too late.
But when Oscar meets Nia, she has him feeling things he never knew existed before. Oscar will do anything to keep Nia the way she is, safe from the Messages… even if it’s at a great price.
Review
Pam Bachorz takes a great concept and spins it into a suspenseful and engrossing story. CANDOR is brutal, frightening, and altogether unique.
Oscar is a male narrator whom many can relate to. He’s resourceful, independent and at odds with his father’s beliefs, but still looking for acceptance and respect. His reactions to Nia’s appearance in his life are true to his gender, which endears him all the more to readers. While I wouldn’t say that any of the characters exude likability, Oscar is far more well-rounded than secondary characters, who tend to dive too close to annoying and unnecessary for me.
Bachorz writes in a sparse style that is reminiscent of Lisa McMann’s WAKE trilogy. While this makes me feel detached from the characters at times, it also effectively contributes to CANDOR’s urgency and danger. There are no unnecessary details here: in CANDOR, it’s all about the pacing, the in-the-moment, in-your-face events. I was floored by the ending, which was perfect in its imperfection. The ending had me thinking about this book for a while after I had finished it; whether or not this book has a sequel, it’s bound to make you reconsider the dynamics of parent-child relationships.
CANDOR is a great book to introduce teens to after they’ve grown out of Lois Lowry’s novel, THE GIVER. In an exploding dystopian lit genre, this one will stand out because of its creativity and the power that it will wield over readers.
Similar Authors
Lisa McMann
Lois Lowry
Writing: 4/5
Characters: 3/5
Plot: 4/5
Overall Rating: 3.5 out of 5
Cover discussion: 3 out of 5 - I like the rows of monotonous houses (even though I don't picture Candor as looking that way), the headphones (read the book to find out), and the splashes of glaring orange on the otherwise eerily dull cover. But the model is not how I picture Oscar. (Although that might just be because the name "Oscar" brings up certain unappealing images in my head...) Still, though, it's pretty good.
EgmontUSA / Sept. 22, 2009
Posted by Steph Su at 10:44 AM

Email ThisBlogThis!Share to TwitterShare to FacebookShare to Pinterest
Labels: 3.5, pam bachorz, review, YA