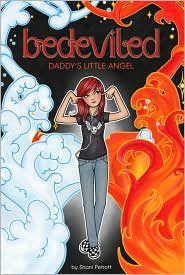 Bedeviled, Book One
Tags: MG, paranormal, popularity
Rating: 3 out of 5
Summary
Angel Garrett has just several wishes on her thirteenth birthday: for Cole Daniels to notice her, and to go to the Mara’s Daughters concert. Imagine her surprise at the arrival of her father—whom her mother said was dead—and the greater shock that her father is the Devil himself!
Angel wants nothing to do with the Devil, but her father, desperate for some father-daughter bonding, shows Angel what he can provide for her: the concert, the popular friends, the boy, and much more. As Angel navigates the treacherous waters of middle school popularity, she struggles to keep her old best friend as well as reduce the influences of devilish magic in her life.
Review
If you want a classic middle school popularity story with a funky paranormal twist, consider Shani Petroff’s debut book. It’s got the social angst that will appeal to middle school girls, with just enough crossover appeal that will sing for older readers.
I enjoyed Shani Petroff’s take on the Devil, making him into a—dare I say it?—likable, sympathetic character. (I mean, the guy wants to be called Lou. Is that non-Satanic enough for you?) DADDY’S LITTLE ANGEL convincingly shows the limitations of external influences on one’s social standing in school without sounding preachy. While older readers might sigh in exasperation at Angel’s retrospectively painful desire for popularity, younger readers will easily sympathize with Angel’s emotions and behavior in a Judy Blume-like way.
The one aspect of this book that consistently disconcerted me, however, was how I thought that DADDY’S LITTLE ANGEL was written in a way more similar to YA than MG books, when the characters and circumstances of the book clearly lean towards the MG crowd. Angel’s desires and actions are definitely those of a 13-year-old’s, but the way she narrated her story made her more reminiscent of an older teen. While this discrepancy jarred my belief of her as a genuine middle schooler, the more mature tone in narration might be the key to drawing in older readers.
Overall, DADDY’S LITTLE ANGEL is a cute paranormal read. MG readers can read it alongside Judy Blume, while older readers looking for a light paranormal read won’t do wrong in picking this one up. I’m definitely curious as to what happens next in the sequel, BEDEVILED: THE GOOD, THE BAD, AND THE UGLY DRESS!
Similar Authors
Meg Cabot
Ally Carter
Judy Blume
Writing: 3/5
Characters: 4/5
Plot: 3/5

Overall Rating: 3 out of 5
Cover discussion: 3.5 out of 5 - Totally cute! Something that would definitely catch my eye if I were a middle school girl.
Thanks to Shani for sending me an ARC to review--along with some adorable angel/devil ducky keychains!
Brought to you by Traveling to Teens. Check the weebly for more tour stops, giveaway information, and more!
Interview with Shani Petroff!

1. What are some of your favorite stories (from any genre) involving the Devil/Satan?

I loved the TV show REAPER. It’s not on the air anymore, but it was about a guy forced to catch escaped souls for the devil. I remember thinking the show would be even better if the main character was the devil’s son. Then I thought, I’d actually prefer to see a show about the devil’s daughter. That idea kept floating around in my head, and I thought, well, why not just write it myself? And BEDEVILED was born. On a later season of REAPER it turned out that the main character was the son of the devil, so I guess I was onto something!

2. In what ways can you relate to Angel, the protagonist, and her middle school experiences?

Overall, like Angel, I really wanted to fit in—to be a part of the popular group, but at the same time I also wanted to be my own person and not have to go along with the crowd. More specifically, like Angel, I sat behind a really cute guy in homeroom (although I think that may have been 9th grade instead of 8th), my bedroom was always a disaster zone, I blushed at the tiniest little things (still do), and was absolutely horrendous at volleyball and dreaded going to gym.
Me: Oh, the cute-guy-in-homeroom memories! :)

3. If Bedeviled were made into a film/TV show, who can you see playing the main characters?

Ooh, I love this question. I used to intern for a casting director and always thought it was fun to dream up ideal cast lists.

For Bedeviled, the easiest one for me to cast is Lou—the devil. I always pictured him as a cross between Brad Pitt and Josh Holloway (who plays Sawyer on LOST). They are both so charismatic and Josh Holloway has the perfect dimples for the part!

I also always pictured Selena Gomez as a member of Mara’s Daughters, the band Angel is dying to go see. I have a whole elaborate back story for them filed away and have even dream cast myself as their manager/older half-sister. :)

For Cole, Angel’s crush, I pictured Nick Jonas. Now I know he’s a little old for the part, but it seems Hollywood often casts older people to play younger, so I think it’s okay!

I see Debby Ryan, who plays Bailey on THE SUITE LIFE ON DECK, as Gabi (Angel’s best friend).

And then there’s Angel, my protagonist. I thought I’d have no problem casting her, and yet she’s the one I’m having the toughest time with. I haven’t come up with someone yet. But I’d love to hear your thoughts!!
Me: I can TOTALLY see Brad Pitt playing Lou, the Devil. And not just because he's the Devil in Meet Joe Black!

4. What books are you currently reading right now?

I got my hands on an arc of THE LINE from Teri Hall that I’m excited about. And I just bought PROPHECY OF THE SISTERS by Michelle Zink which looks so good! I can’t wait to jump right into it.
-
Thanks for answering my questions, Shani! Be sure to keep an eye out for DADDY'S LITTLE ANGEL in bookstores--it costs only $6.99 and is loads of fun!
Posted by Steph Su at 9:15 AM