Review: The Sky Always Hears Me by Kirstin Cronn-Mills 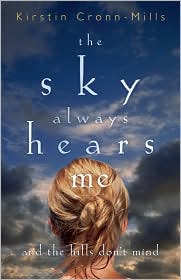 Tags: YA, GLBTQ, Midwest, small town, love, sexual orientation & identity, family
Rating: 4.5 out of 5
Summary
Morgan is dying to get out of her small hometown of Central Nowhere, Nebraska. Things with her boyfriend of two years, Derek, have long since hit a rut. She has a hopeless crush on Rob, her co-worker at the local grocery store. Her father and stepmother are always fighting, and on top of all that, her neighbor and classmate, Tessa, kissed her one night over the summer…and Morgan kissed her back.
To escape from her romantic problems, Morgan likes to borrow her grandmother’s car and drive to the empty hills to scream. For a long time, her grandmother has been the only person in the family Morgan can talk to. But when tragedy strikes, and a devastating secret is revealed, Morgan must learn that forgiveness is the first step to acceptance and happiness in all aspects of her life.
Review
THE SKY ALWAYS HEARS ME is utterly incredible. It’s saucy and hilarious, twisted and touching. I can’t get enough of Morgan’s story and Kirstin’s writing.
Never before have I come across a protagonist like Morgan. Her snark and wit reminds me of Jessica Darling from Megan McCafferty’s hit series (which I love), but her conciseness of speech and thought reflects more of Courtney Summers’ characters (another author whose writing I love). Her voice had me constantly cracking up on the inside, a healthy relief from her borderline melodramatic life, which kept my countenance, if not my inner mental state, somber.
Kirstin Cronn-Mills skillfully develops her characters so that all of them are three-dimensional. All too often the choice that the protagonist should make is too easy for readers to spot early on, but that doesn’t happen in this book. Yes, Morgan is bombarded with dozens of issues, but readers can clearly see why a resolution is not at all simple. There are many different ways—all equally legitimate—that Morgan could have played out her life, and also satisfying is the realistic ending: one that speaks of hope, but also does not play off of unrealistic dreams of eternal love or easy paths to happiness.
This book is not without a bit of melodrama, of course. Any one of those issues mentioned about in my summary is enough to provide several hundred pages of fodder for a good YA novel. To have them all in the span of 250 or so pages is perhaps overkill. However, things start straightening themselves out in the second half, and by the end of the book I was satisfied with how everything was resolved. Throwing a bunch of issues into the main character’s life is a rather amateurish move, but Kirstin navigates Morgan’s way out of the overwhelming problems with the ease of a much more established writer. Overall, it’s an admirable narration and plotting job.
THE SKY ALWAYS HEARS ME is one of those books that a lot of people will like, but a few will really get. I think I am one of those people who get it and absolutely love it. Morgan’s irreverence and Kirstin’s writing style made a long-lasting impression on me. Even if the book doesn’t end up speaking to you the way it did to me, you’ll still be satisfied with this intelligent, snarky, and deeply satisfying book. Well done, Kirstin. Well done.
Note: contains sex and language. Recommended for mature teens/readers.
Similar Authors
Megan McCafferty
Courtney Summers (Cracked Up to Be)
Cecil Castellucci (Boy Proof)
Writing: 5/5
Characters: 4/5
Plot: 4/5
Overall Rating: 4.5 out of 5
Cover discussion: 3 out of 5 - For a book with as many issues as this one, I think it's good that the cover is simple and ambiguous, even if it doesn't tell much about the story. But seriously, who needs cover lust with that fantastic title? (Title lust, anyone?)
Flux / Sept. 1, 2009
Many thanks to Courtney at Flux for providing me with a copy for review!
Posted by Steph Su at 1:58 PM