We already know that 2010 is going to be an incredible year for YA and MG books... but have you seen how utterly BEAUTIFUL some of the 2010 covers are, also? Here are just a few of my favorites:

Every Little Thing in the World by Nina de Gramont

The story is about a pregnant teen girl who gets sent to a wilderness camp, and I love everything about this cover. I love the water splashes, and even the model's expression, and that random translucent swishy thing that I can't figure out what it's supposed to be. But the thing that I think makes this cover? The lighting. Just look at the way the "sunlight" hits the model's left side, as well as that little bit of yellow brilliance in the translucent swishy thing. This cover could be just another flat, generic picture, but the lighting makes it pop and really takes it to another, exciting, and memorable level. 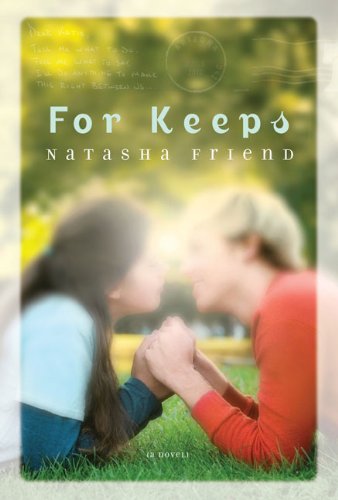 For Keeps by Natasha Friend

So someone correct me if I'm wrong, but it appears that the top cover (which is the one I was familiar with) is the old cover, and the bottom cover (which is the one showing on Amazon) is the one they're actually going to use. I actually prefer the top (old) one, because OMGLOOKATTHEFOCUSTHEBORDERTHEWATERMARKPOSTAGESTAMP. Um, yeah. That one takes my breath away. The colors go from cool and dark at the bottom to bright and borderline gauzy on the top. Then, of course, there's also the clarity of the foreground that blurs into the background, making the identities of the two models second to what's evoked by their intertwined hands. Ah, love. *smiles*

Whereas the second one... hmm, I dunno... I like how their faces are still blurred so they can be AnyBoy and AnyGirl, but I think the first one is more emotional, while the second leaves less to the imagination. Well, I think both covers would sell well. What do you guys think?

Wicked Girls: A Novel of the Salem Witch Trials by Stephanie Hemphill

Dude. The hair. It's so... witchy? Well, anyway, I think it's really cool. And the title font matches the hair really well. This one evokes less than the first two, I guess, but there's still something about it that makes it appropriate for a 21st-century book about the Salem Witch Trials. Some sort of creepy mysteriousness, y'know?

So what do you guys think? Do you have a favorite out of these three (or four)? Which of the For Keeps covers do you like more? Would you pick these up in a bookstore, knowing nothing about the books?
Posted by Steph Su at 11:43 AM