Review: The Betrayal of Natalie Hargrove by Lauren Kate 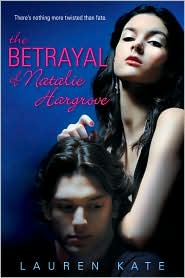 High school senior Natalie Hargrove has worked hard to get from trailer trash to a ruling member of Palmetto High School. The culmination of her work should be the much coveted Palmetto Princess crown, alongside her longtime boyfriend, Mike, who should be a shoo-in for Prince. However, one person may stand in her way of couples glory and domination: her least favorite person, Justin Balmer, who is a reminder of all that Natalie has tried to get away from.

After a wild party, Natalie and Mike devise a prank to give Justin a little of what he deserves…except that the prank turns out horribly wrong. Now, Natalie must scramble to cover up their tracks and lay the blame on someone else as everyone she trusts begins slipping away from her. Can Natalie use her considerable scheming prowess to save her reputation and future, or has she crossed the line this time?

THE BETRAYAL OF NATALIE HARGROVE is an unapologetically guilty-pleasure read that will make your insides squirm with half-pleasure, half-horror. With a wonderful voice, tantalizing characters, and a steady plot, this book seems tailor-made for teen girls looking for a fast and furious read.

Natalie reminds me of many bitchy and manipulative queens of high school society. Her voice is spot-on and full of judgment against those who cross her path as well as the constant fear that she will be exposed as a fraud. She is the girl you love to hate, and yet can’t read enough about. Though definitely callous at times, Natalie is also simultaneously the desperate, lost girl struggling to gain footing on a suspicious land. Her actions may be despicable, but she is also wonderfully justified in doing what she did, which is a remarkable achievement on Lauren Kate’s part.

Indeed, I found almost all of the characters fascinating with their complicatedly bad sides. Here, there are no perfect characters, and it’s almost like watching a CW drama, the way you can’t look away from these train wrecks of characters. (On a side note, I believe I also have a bit of a bad-boy crush on Justin.) Nobody really changes much throughout the story, but they are interesting enough that you just might overlook that and focus on the drama itself.

The story slowly unfurls Natalie’s past, as well as what happened between her and Justin. It can be an infuriating process, the way hints are dropped sporadically, unhelpfully. However—and it may be my slightly masochistic side saying this—I found the ending satisfying, in all its shock and, yes, even unexpected sweetness.

THE BETRAYAL OF NATALIE HARGROVE may not be for everyone, but if you’re willing to overlook the fact that all of these characters and the entire situation itself are far from admirable, you’re in for an enjoyable ride.

Email ThisBlogThis!Share to TwitterShare to FacebookShare to Pinterest
Labels: 3, lauren kate, review, YA