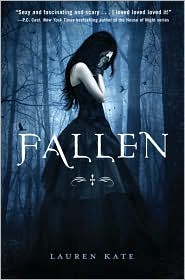 When 17-year-old Luce Price enters Sword & Cross reform boarding school in Savannah, Georgia, she is immediately attracted to the aloof, gorgeous, and strangely achingly familiar Daniel Grigori. Luce could swear she feels a connection with him, but Daniel rebuffs all her attempts to get to know him better, and even though another hot guy named Cam is paying her a lot of attention, Luce still can’t Daniel out of her mind.

Little does Luce know that Daniel is trying to stay away from her for both of their sakes. For they are irrevocably connected by a cruel curse—one that will kill Luce if she gets too close to Daniel…

If FALLEN is the future of YA supernatural fiction, then I fear for this genre. FALLEN is painfully dull and slow, with very little besides the concept of fallen angels and the suggestion of an impossible romance to recommend it to readers.

If the plot of FALLEN were to race a glacier, the glacier would win. From the moment Luce arrives at Sword & Cross, the plot feels like it’s always tripping over its own feet in order to explain itself, and to no avail. I don’t mind a gradually building plot if it contains atmosphere and sets up the exposition well, but the setting of Sword & Cross was never fully realized for me, and the events in Luce’s past that landed her at reform school never attained credibility. Luce floats through boarding school life in a series of disconnected and awkwardly written encounters with her schoolmates, none of which helped me understand Luce or any of the other characters. All of the action and scenes required to get the gist of the story occurred within the last 60 pages, and what happened was not worth plodding through 400 pages of irrelevance to get to that point.

All of the characters in FALLEN were static and artificial, something that less discerning Twilight-fangirling tweens won’t mind but that more well-read readers will definitely take issue with. Luce is about as passive as a bowl of rice pudding. You think Bella didn’t do anything for three-and-a-half 400-plus-page-long books? Luce just might make Bella look like head of the school spirit squad. She flits from scene to scene, never being fully integrated into the immediacy of the story and never coalescing into a comprehensive character. The thing I most remember about her was that she had short hair from when it got burnt off in a fire. If the way I describe a character is by the length of her hair and not any, I dunno, actual personality traits, you better believe that is a serious problem.

Along those same lines, Cam and Daniel were similarly bland male love interests whose only identifiable characteristic was their inexplicable—and inevitable, in this sort of book—attraction to Luce. I constantly got the two mixed up and couldn’t pick them out from a handful of YA male love interests if I had to. I am hardly questioning the appeal of stalker-y, unequal-power-dynamics love—there is a reason why so many of us love bad boys so much—but to have Cam and Daniel be so one-dimensional and predictable, while the story practically insists that we’re supposed to find them heart-stoppingly attractive…sorry, but I really don’t need that.

We’ve all heard the quiet rumblings that fallen angels might be the Next Big Thing in YA lit, but only if they’re done right. FALLEN read like a boarding school story with smatterings of the supernatural dashed throughout, the angels-and-demons element only manifesting itself in the final few chapters. It was a discomforting read because it was so detached from those elements of humanity that make even the most fantastical novel relatable: the Southern setting was never fully realized, and the characters were difficult to empathize with.

That being said, FALLEN gets two stars from me because I can totally see its appeal to middle school girls who have devoured the entire Twilight series and now desperately need something to read in between the next House of Night book and the Eclipse movie coming out in Summer 2010. It contains all the elements of a trendy YA bestseller: a paranormal element, a love triangle, two powerful love interests who compete for the same girl. Unfortunately, the great idea was poorly executed, and I won’t be following the rest of this series. However, consider asking your thirteen-year-old sister or cousin for her opinion on FALLEN, and you might get a totally different point of view, one that justifies why Random House believes that FALLEN will be huge in YA.


Cover discussion: 2.5 out of 5 - It's...cool, I guess? Definitely discombobulated and rather unrelated to the story--kind of like many scenes in the story itself, I suppose.


ARC sent by publisher for review.

Comment on this review for an extra entry into my Lauren Kate giveaway.
Posted by Steph Su at 10:30 AM