Review: After the Moment by Garret Freymann-Weyr (TLC Book Tours) 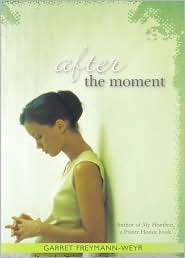 When circumstances compel him to move in with his father, stepmother, and younger stepsister, high school senior Leigh Hunter never imagined that he would fall in love for the first time in his life. Her name is Maia Morland, and she is beautiful but tragic, inspirational yet self-destructive. Leigh begins to believe that he can create a life around Maia, but when something horrifying happens to her, he realizes that his love for her may not be enough to save her.

AFTER THE MOMENT is a subtle exploration of the power of different kinds of relationships in one young man’s adolescence, a dramatically poignant love story that will perhaps appeal best to adult fans of doomed romance novelists like Nicholas Sparks. Personally, however, I had trouble connecting with the characters as well as believing the story arc.

A love story told from the guy’s point of view is rare and certainly no easy feat, but Leigh Hunter is a genially complex protagonist. It’s obvious that he cares very much for his family members (particularly his stepsister, the ineffable and incredibly mature middle schooler Millie), although he may not agree with them most of the time and hardly aspires to be like his emotionally autistic father. Leigh is forced to make incredibly difficult decisions; it is easy to see why the events of his senior year have had an impact on the rest of his life.

However, I found it hard to become emotionally invested in the characters and their stories. The story is told from the point of view of an older Leigh, which I think contributes to the distance I felt from the characters. They were living out their tragedies and dramas in a snowglobe, to which I was only a polite audience. The supporting characters, while well-meaning, never felt quite fully developed for me: the adults were either dispensers of inexplicable wisdom or else emotionally unavailable, and the preteens and teens often did not act their age.

Perhaps all of this would have been fine for me had the main storyline—Leigh and Maia’s romance—been believable and likable. As it is, however, it’s hard to see why Maia is the source of so many guys’ interests. I felt like there was a disconnect between her tragic side—a truly heartwrenching and relatable mix of maternal neglect, self-destruction, anxiety, and self-blame—and the part of her that attracts nearly everyone around her to her. As an interesting and complex character, Maia was fascinating; as the love interest, not so much.

I found the plot and pacing to be quite slow and often unengaging. Since the narrator is an older-and-wiser Leigh, the story often reads like a clinical examination of Leigh’s first love, with plenty of time devoted to Leigh’s characterization and his interactions with other people, and not enough to the readers’ engagement in the story. The ending—the horrifying event that befalls Maia, Leigh’s reaction and the consequences that result—felt like it was so rushed and unexpected, which I suspect had more to do with my emotionally detachment from the story and less with the actual proceedings, a detachment that unfortunately contributed to my disbelief of the events in the last part of the book.

It is obvious to me, though, that Freymann-Weyr cares very much about the psychological workings of adolescents, and I think that AFTER THE MOMENT is not a flop of a story, but rather a poignant tale that was marketed to the wrong audience. Certainly Nicholas Sparks and Nora Roberts fans will appreciate the gentle and affecting romance between Leigh and Maia. If you’re an adult reader looking for a slow but sweet read, or a teen with lots of patience and a penchant for intense romances and enigmatic heroines, consider AFTER THE MOMENT for a stirring and relaxing weekend read.


Cover discussion: 4 out of 5 - I really love this cover (I like the whole jacket layout, actually; the spine and the guy on the back cover are great). The greens are soothing, the font choices are attractive and appropriate, and I think the model and her pose are very indicative of Maia's nature, and there's a small hot guy on the back representing Leigh too!

Thank you to HMH for providing me with a copy for review.

This review is part of a TLC Book Tour. For more information, please click here.
Posted by Steph Su at 9:00 AM