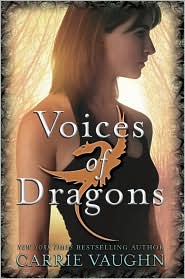 Kay Wyatt lives with her parents in a small town close to the border that separated the land inhabited by humans from the land of the dragons. Except for occasional glances from afar, no one had ever truly seen a dragon, much less talked to one, since the treaty many decades ago that gave the dragons their own land in exchange for peace. But one day, a dragon rescues Kay when she’s out hiking. Fascination overcame fear, and Kay and the dragon, Artegal, become friends, meeting despite the fact that they can both get in lots of trouble if they are found out.

When an escalating series of events ominously promises the start of another war between humans and dragons, Kay and Artegal realize that their rare friendship, while illegal, may be the only chance of saving the world from devastation.

VOICES OF DRAGONS, Carrie Vaughn’s YA debut, is a fascinating blend of modernity and the ageless awe of dragons. From the start, I was effortlessly pulled into Kay’s world and greatly enjoyed this unique tale that melds new with old.

The greatest strength of this book is in its world-building. Carrie Vaughn easily creates for us readers a world in which it is natural for humans and dragons to coexist in an uneasy sort of peace. The presence of dragons is smoothly intertwined with our own history, and Kay’s border town is a well-drawn location of new troubles but classic fears, of dragon raid drills among a world of high school relationships, rock climbing, and the wild beauty that is Montana.

While the plot is comparatively simple and even a little slow at points, Vaughn’s depiction of the dragons is enough to hold our attention despite the plot’s conventionality. Artegal, through Kay’s eyes, is an astonishingly complex character, with the dangerous majesty of that mysterious race. In comparison, Kay is relatively unextaordinary: she rarely gets a strong, standout voice.

But that was okay by me for this book. Carrie Vaughn is an accomplished writer whose smooth prose can make even the most basic story elements shine. VOICES OF DRAGONS is unlike anything I’ve read before, and not only will I pounce on the sequel when it comes out, this book has also reawakened my interest in dragons in literature. Check it out: I dare you!


Cover discussion: 2 out of 5 - Unfortunately, I am not at all taken in by this cover. Despite the lovely warm, golden hues, the model is bland and doesn't remind me of Kay, and the dragon? Hardly noticeable. I am disappointed. I want more dragon, less stereotypical image of teen girl staring pensively.

Borrowed from library, then bought for permanent collection.
Posted by Steph Su at 6:00 PM