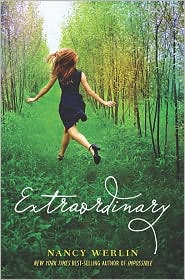 Phoebe Rothschild, the latest descendent of a powerful Jewish family, befriends Mallory, the strange new girl, in seventh grade. For years the two girls are inseparable, but Mallory is hiding a terrible secret from Phoebe. As Mallory plays with Phoebe’s emotions, Phoebe struggles with her own self-worth, already flimsy due to her beautiful best friend and the accomplishments of her family. Then Ryland, Mallory’s older brother, enters the picture. Phoebe finds herself almost irresistibly attracted to him, and it seems as if he reciprocates her feelings, but why is Ryland really here? Unable to trust the people closest to her and manipulated by powers beyond her comprehension, Phoebe must learn for herself what it truly means to be an extraordinary person.

With its beautiful cover, I really wanted to like EXTRAORDINARY. But it didn’t turn out as I had hoped. Choppy writing and distance from the characters marred my reading experience of EXTRAORDINARY.

If Nancy Werlin was going for a fairy tale-like narrative style, then she succeeds. The narration feels distant from the characters: oftentimes, the characters’ thoughts and peculiarities are told rather than shown us. Fine for a fairy tale (have you ever read the Grimm brothers’ works?), but I couldn’t be sure if that was what the author intended. It is a book featuring fairies, but whether the narration was supposed to match the ethereal quality of its fantasy aspect, or it was simply clunky and emotionally ineffectual writing, I couldn’t tell.

There was definitely a forced quality to both the writing and the story. I understand that Mallory and Ryland manipulate Phoebe—but I remained unconvinced that Phoebe was so easily convinced by their machinations. Phoebe falling in love with Ryland, who is so vague in the performance of his supposed attentions toward her? I didn’t necessarily have to like Ryland—I don’t think that’s the intent—but I at least had to believe that Phoebe would really like him. Which I didn’t.

EXTRAORDINARY was an interesting attempt to meld together the formalities of fairie court life with the concerns of contemporary human beings. However, it was missing the connection between story and reader that I desire in the books I read. As a result, this is a hard one for me to recommend.


Cover discussion: 4 out of 5 - So pretty. That color green is just so vibrant.

Email ThisBlogThis!Share to TwitterShare to FacebookShare to Pinterest
Labels: 3, nancy werlin, review, YA