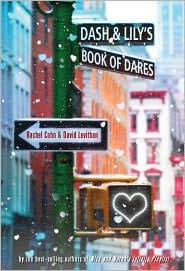 Dash’s lackluster Christmas break begins to look up the moment he finds the red notebook nestled between his favorite author’s books in the Strand bookstore in New York City. Inside contains instructions from a girl named Lily. Suddenly, Dash finds himself corresponding via notebook to a girl he has never seen but is getting to know, wandering all around the city to complete her tasks and to set up tasks for her.

For the first time in her life, Lily is spending Christmas without most of her family. Her love-obsessed gay older brother creates the notebook to give her a shot at finding a guy who’s right for her. As Lily confides more and more in the red notebook, however, she wonders if the boy behind the words is actually real, or merely a figment of her (desperate and lonely) imagination.

Will these two teenagers find one another in the whirlwind that is a New York City Christmas?

Fans of Rachel Cohn and David Levithan’s collaborative novels will no doubt enjoy DASH & LILY’S BOOK OF DARES. Full of the writing duo’s trademark humor and insight, this book can be read on multiple levels by all different types of readers.

On a basic level, DASH & LILY’S BOOK OF DARES is an entertaining scavenger hunt of self-discovery and romance, through one of the greatest cities in the world. Beginning at the Strand, arguably one of the world’s most interesting bookstores, and hitting many of NYC’s most famous tourist-ridden holiday stops, this book take us through a mini-tour of the city, and giving us snapshot glimpses of just why New York has long been considered the city of opportunity and possibility.

Even better, Dash and Lily wander through the city with a hearty dose of wit. Dash is that brand of self-deprecating, too-smart-for-his-own-good, disillusioned and highly philosophical teenage boy that is rare in real life but utterly appealing in both life and fiction. Lily is more of the scatterbrained eternal optimist type. The two of them often don’t seem like they should work out, but that’s the beauty of a love story.

On a deeper level, DASH & LILY doesn’t quite fully succeed in being the introspective, philosophical stimulus it seems to want to be. I mentioned that Dash sometimes thinks too much for his own good. What starts out as a merely entertaining courtship turns into an attempt to explore the deeper sides of relationships, self-esteem, and people’s need for companionship. Halfway through the book, Dash does the kind of turnaround in his notebook revelations that would leave me two steps from freaking out and worried that I had done something wrong if I were Lily. What could have been a feel-good romance changes as a result into an attempt to explore the messiness of people coming together in a romance. I’m all for messy relationships, but I’m not sure I bought that the two of them liked each other well enough before the turning point to continue their communication the way they did. It felt to me like different sides of the characters tried to come out in the second half of the book, and I wasn’t entirely convinced that the characters would act like that in those situations.

Despite that, most readers should be enamored with DASH & LILY’S BOOK OF DARES. It’s not exactly a feel-good romance, but would make a nice break from the real world in terms of holiday reads.


Cover discussion: 4.5 out of 5 - It is so gorgeous! Very colorful, unique, and memorable.

Review copy received from publisher.
Posted by Steph Su at 9:00 AM