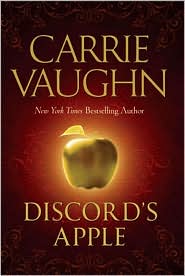 When Evie Walker returns to her small-town hometown to take care of her sick father, she doesn’t realize what she’s in for, and what secrets about her family her father has been keeping from her. For underneath their house is a magic storeroom, one that many infamous characters—including one ambitious goddess—want access to. Aided by the help of an enigmatic man named Alex, Evie comes into her familial destiny and fights to prevent the total destruction of the world as she knows it.

DISCORD’S APPLE is an epic endeavor that successfully covers a wide range of story topics, from dystopian politics to Greek mythology to fairy tales.

If there’s one thing Carrie Vaughn knows how to do, it’s world-building. All of her worlds in all of her books are effortlessly written; their peculiarities and differences from our world unfold through easy dialogue and descriptions. Evie’s world is part dystopian (countries at war, daily bombings, police checkpoints on the interstate freeways), part fantasy (fictional characters showing up as “real” people). If you can handle multiple storylines and cross-genre settings, then you’ll get a kick out of DISCORD’S APPLE.

The characters in DISCORD’S APPLE feel more like stock characters than uniquely appealing people, but it didn’t bother me nearly as much as it might other readers. Evie is a little on the bland, damsel-in-distress side; Alex’s backstory is fascinating to read about, but his contemporary existence alongside Evie is a little TOO enigmatic to garner much sympathy. Nevertheless, I devoured this book because the story was just so original and epic. Can YOU imagine your pre-apocalyptic world on the brink of a magical disaster? It’s ambitious, I know, but Carrie Vaughn does it well.

The ending was satisfying for me in its bizarreness, but it may frustrate others. If you choose to read DISCORD’S APPLE, be prepared to suspend your notions of how fantasy and dystopian literature work. This book will impress fans of Carrie Vaughn’s other works, for sure, but if you’re just starting out with her writing I might recommend starting elsewhere, as DISCORD’S APPLE does require commitment and leniency in order to fully appreciate it.


Cover discussion: 4 out of 5 - I really like it. The colors are so lush, the tones appropriately centering around the golden apple.