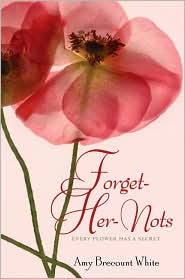 On Laurel’s fourteenth birthday, she receives a seemingly impossible letter from her mother…because her mother is dead. Not long after, Laurel becomes interested in the “language” of flowers—in the way that different flowers can send different messages. To her shock, she discovers that her flowers are actually effective in bringing about what she wants them to, and soon Laurel has her hands full juggling bouquet requests from classmates who may or may not be her friends, working out her feelings for a boy, and unraveling the Flowerspeaker secret that generations of women in her family have possessed.

Amy Brecount White’s debut novel is a surprisingly charming magical realism middle-grade novel that sweetly combines magic, romance, and teen drama into something that will be well enjoyed by young girls who enjoy a combination of Harry Potter and Twilight.

Despite the occasionally annoying teen speak (draaawwwn out syllables, luv instead of “love,” lots of seemingly life-or-death ultimatums), FORGET-HER-NOTS is actually very well written for its intended audience. Right from the start, White draws us in with her thorough and fascinating knowledge about the language of flowers. Laurel, despite being a typically lonely and insecure teenage girl, never drops into the land of annoying protagonists. She is sweet and vulnerable, yet determined to master her gift and to help everyone out.

FORGET-HER-NOTS focuses mostly on Laurel’s struggles to establish lasting relationships with the people around her, and it is well done. The girls whom Laurel befriends have their good and bad points; the tension between Laurel and her politician widower father are believable, despite the fact that Laurel believes their fights come about due to the influence of the flowers. I appreciated that the magical elements of this novel were never used to excuse the characters’ up-and-down behaviors—for, indeed, they were realistic, and readers will be able to relate to Laurel’s mixed feelings about the people around her.

Despite a slow plot and occasional underdeveloped supporting characters, FORGET-HER-NOTS will be a treat especially for middle school girls who will find White’s narration relatable and the magical realism elements irresistible.


Cover discussion: 3 out of 5 - I think the pressed-flowers look of the cover complements the often whimsical feel of this magical realism novel quite well, in spite of its lack of...well, specialness or excitement, I guess.