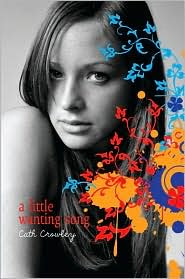 Charlie Duskin knows her summer in her grandfather's small country town is not going to go well. This is the first summer she's spending in town after her warm grandmother died, her distant father seems to still be mourning her mother (who died many years ago), and the girl next door, Rose Butler, still hangs out with boyfriend Luke and friend Dave while pointedly not inviting her along. Charlie's full to bursting with music, songs that she's written, but she doesn't know how to let others hear her, and even if she did, there is no one around who would listen.

This summer, however, things are going to change. For the smart if jaded Rose Butler is determined to escape into the city, away from the dreary country and the horrifying future of ending up like her mother, pregnant and stuck. For this, striking up a friendship with Charlie Duskin seems like a good idea. But neither of them could have imagined what a few short weeks would bring for them.

Who could've guessed that such an unassuming book could be so lyrical, so haunting, so memorable? But so it is. A LITTLE WANTING SONG blew me away. More than simply pretty words or a classic coming-of-age summer story, Cath Crowley’s impressive novel is beautiful inside and out in its own quirky way, just like its characters.

Cath Crowley clearly has the heart of a poet. Words feel like her beloved; there is a simultaneous ease and depth with which she writes, stringing phrases together that, at first glance, don’t look like they would work, but when you look closer, you realize could not have been better expressed. This is one of my favorite passages (and you know it’s an unusual day—and review—when I’m actually quoting from the book):

"I stand under the waterfall while it smashes at rocks and skin and memory. Gus and Beth take me to bands when they can, when it's underage or they know the people running the gig. You walk inside, and the music's so loud the world shatters and the things that didn't make sense before still don't make sense but they don't have to while you're in there. That's what it's like here. The water makes everything ice and cracks. I'm standing under bits of falling me. Dave and Rose are screaming, but I can't hear them. I scream back all the things I want in this world that I can't have. The water's making me cold and Dave's making me burn and I'm writing songs played with strings of sun and ice and honey." p. 113 (ARC version)

There’s rhythm and music and a sort of profound understanding of humanity all here. It’s like magic. There’s no other way to describe it.

But, of course, a book cannot just stand on one excellent aspect alone, and the characters in A LITTLE WANTING SONG are that slick combination of too-cool-for-us and one-of-us. Maybe it’s the way Cath writes, which makes me feel like Charlie, Rose, Luke, and Dave live in this world that’s much cooler than mine, even though it’s technically the same world, and they certainly don’t think they’re living in poetry. However, I adored the dialogue, and the way they were all distinct, and the way I could half recognize them and half be fascinated by their “otherness.”

It’s hard for me to review A LITTLE WANTING SONG, as its beauty cannot be imitated, and must be experienced to be believed. Perhaps I’ll just leave with saying that, as soon as I get my hands on a finished copy, I know this will be a book that I’ll reread when I need inspiration, and I know that I’ll always be able to find something new to love each time I do.


Cover discussion: 3 out of 5 - I know that, on second glance, it's not much. I don't believe that that girl is Charlie (maybe Rose, but still). But I do like the desaturated image, and the colorful swirlies.

ARC sent by author (via publisher) for review. Thank you so much, Cath!


Come back tomorrow for an interview with the author, Cath!
Posted by Steph Su at 9:30 AM

Email ThisBlogThis!Share to TwitterShare to FacebookShare to Pinterest
Labels: 4.5, cath crowley, review, YA