In My Mailbox is a weekly meme inspired by Alea and hosted by Kristi. Check out Kristi's post to see what others got for books this week!

My last one for a long, long while, probably. I move to China this Wednesday! 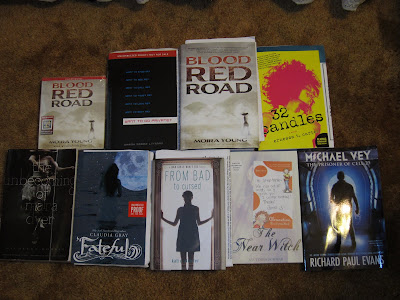 Want to Go Private? by Sarah Darer Littman
I remember talking to Sarah about this book when she was still working on it. I hope it's a terrifying read.

32 Candles by Ernessa T. Carter
Received for a blog tour! I'm excited. I've been wanting to read this for a long time.

The Unbecoming of Mara Dyer by Michelle Hodkin

From Bad to Cursed by Katie Alender

The Near Witch by Victoria Schwab

Michael Vey: The Prisoner of Cell 25 by Richard Paul Evans
Oh dear, another bestselling adult author trying to enter the YA market?

And then Random House sent me a giant box o' books... 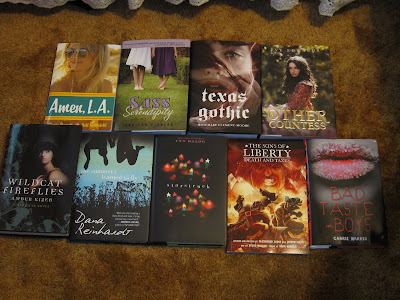 Bad Taste in Boys by Carrie Harris
The Other Countess by Eve Edwards
Starstruck by Cyn Balog
Texas Gothic by Rosemary Clement-Moore
The Summer I Learned to Fly by Dana Reinhardt
Sass & Serendipity by Jennifer Ziegler
Wildcat Fireflies by Amber Kizer
Amen, L.A. by Cherie Bennett and Jeff Gottesfeld
Sons of Liberty, Book 2: Death and Taxes by Alexander Lagos and Joseph Lagos

Bought:
Dragon Bound by Thea Harrison
NOOKcolor - I've been able to read GalleyGrab books on it, yay! Although for now I've kind of been using it primarily to play games. I've gotten quite good at Sudoku by now...

Well, that's all for now, folks. Thank you to all who have supplied me with more books than I could ever possibly read in a lifetime. IMM will be taking a break until I actually, you know, get books over in China. Looking forward to it!
Posted by Steph Su at 11:09 AM