Review: Before I Die by Jenny Downham 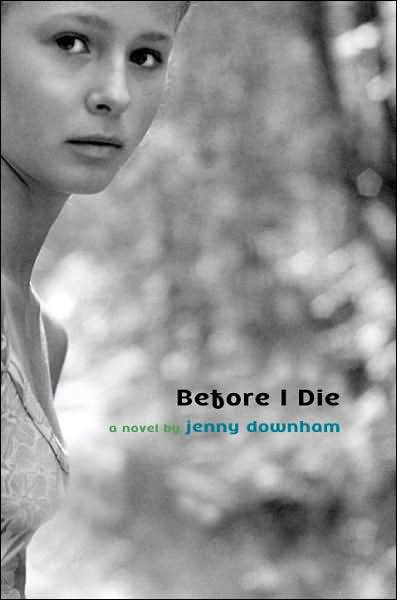 Tessa has terminal cancer, and she’s decided that if she’s going to die young, then she wants to complete a list of things before she dies. Tessa’s list is a little controversial—doing drugs? having sex?—but she’s determined to see them through, while battling her own body and the people who mean well when they try to dissuade her.

But just as Tessa is about to come to terms with her own mortality, something happens that utterly destroys her.

She falls in love.

I had heard lots about BEFORE I DIE before I finally got around to reading it. And while it didn’t change my life the way I thought it was going to, BEFORE I DIE was still a beautifully written story that made me cry big fat tears all night long.

Tessa is not an easy character to like, but I think she behaves in the way that people who are not terminally ill will not understand. She starts off rather reckless, bitter at her diagnosis but pragmatically resigned to her mortality. Indeed, for the first half of the book I had rather little patience for her, as she insensitively plows ahead with her plans without any regard for the people around her. But, like she says, who’s going to criticize her? Her death sentence has given her the power to do whatever the hell she wants whenever the hell she wants. With this in mind, I plowed forward in the story, hoping that I would grow to love her.

While I didn’t end up quite loving Tessa, I did develop great respect for her, mostly through Jenny Downham’s incredible writing. Downham does things with words that you wouldn’t have thought of, yet afterwards you are like, now why hadn’t anyone thought of that before? Her writing had me on page 8:


“I want a big dark room you can barely move in, with bodies grinding close together. I want to hear a thousand songs played incredibly loud. I want to dance so fast that my hair grows long enough to trample on. I want my voice to be thunderous above the throb of bass. I want to get so hot that I have to crunch ice in my mouth.”


“The whole world could roar and it wouldn’t freak me out. I want an avalanche at the next junction. I want black rain to fall and a plague of locusts to buzz out of the glove compartment.”

Worth reading through the less sympathetic parts to get to those.

If you’re looking for a book along the lines of Gayle Forman’s (and, for the record, there’s also an Adam in BEFORE I DIE. Are all fictional guys named Adam so very lovely?), only a little rougher, a little more raw, a little bigger, then check out BEFORE I DIE. And keep some tissues close by, just in case.

Cover discussion: I actually had the UK version, which is possibly even more boring than this one, as it was just a stock photo of dandelions, but this one wouldn't have caught my attention on the shelves, no matter how much I like that photo on its own.